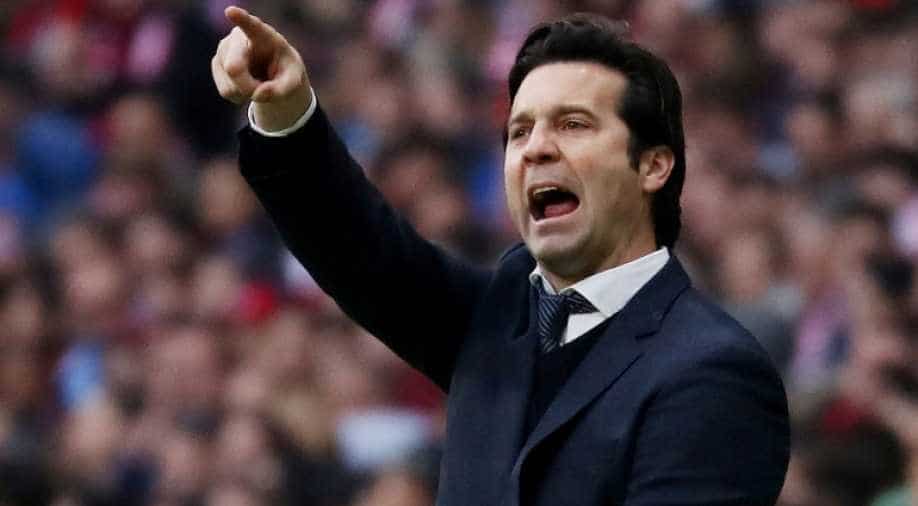 Asked afterwards if it could have been his final game as coach, Solari said, 'I cannot answer that. Tomorrow we have a training session and that is what I focus on.'

Real Madrid's losing run is over but Santiago Solari offered no assurances over his future after a chaotic 4-1 victory over struggling Real Valladolid on Sunday.

Asked afterwards if it could have been his final game as coach, Solari said, "I cannot answer that. Tomorrow we have a training session and that is what I focus on."

Karim Benzema scored twice, including one from the penalty spot, between strikes from Raphael Varane and Luka Modric as Madrid came from behind at the Jose Zorrilla Stadium, after Anuar Tuhami had given Valladolid a deserved first-half lead.

They could have been four up had VAR not twice cancelled out goals from Sergi Guardiola, who later also hit the post, while Ruben Alcaraz blasted an early penalty over the crossbar.

It was a frantic opening half an hour to a frenzied night, which began with the lights going out after a power failure before kick-off and ended with Casemiro being sent off, only for Modric to add Madrid's fourth.

Valladolid were the opponents for Solari's first league game in charge back in November when another rather flattering 2-0 victory set the team off on a run of eight wins from nine games.

But three consecutive defeats at home, to Barcelona twice and Ajax in the Champions League, meant any sense of success this time was muted.

"It has been a difficult week for everyone, for the players too," Solari said.

"The first 20 minutes reflected that and it cost us, but the rest of the game they showed their professionalism, their spirit and how well they have reacted to adversity."

The result was emphatic but, against a Valladolid side that had scored only once in their last five games, the performance less convincing, with club president Florentino Perez watching on in the stands.

"It is difficult for everyone," said Real defender Nacho. "The relationship (with Solari) right now is complicated because things are not working out."

Solari's tenure will almost certainly end in the summer and perhaps sooner, if either results take another turn for the worse or a suitable replacement can be found. Jose Mourinho and Zinedine Zidane were both linked with returns last week.

Gareth Bale, Vinicius Junior and Lucas Vazquez were all injured but there was still no place in the squad for Isco while Sergio Ramos also missed out suspended.

Valladolid might have been four up in the first 29 minutes but Madrid had to VAR to thank, twice, after Alacaraz had already blasted his second-minute penalty high over the crossbar.

Alvaro Odriozola had been caught the wrong side of Oscar Plano after a simple ball over the top as Valladolid were cutting through with ease, particularly down the flanks.

Guardiola was on the receiving end but saw two goals ruled out for offside, the first a tap-in and the second a header, as Valladolid's fans could hardly believe they were not ahead.

Finally, they were, as Guardiola this time supplied the cross from the right, with Anuar unmarked at the back post. The cheer for Madrid kicking off, confirmation VAR had not intervened, was almost as loud as for the finish.

Solari shook his head but his team improved and were somehow level at half-time, as Nacho's jump for a high ball prevented Jordi Masip from a clean catch and Varane was perfectly-placed to poke in.

Anuar could have put Valladolid back in front but, through one-on-one, was put off by Thibaut Courtois and Madrid responded by scoring twice in eight minutes.

Benzema claimed both, the first from the spot after Odriozola proved too quick for Plano and then from six yards, with a superb, albeit unchallenged, glancing header.

Guardiola's rotten night continued as he volleyed onto the post before Casemiro earned a second yellow card with ten minutes left for standing in front of a free-kick.

But Valladolid were running on empty and Modric wrapped it up. One step-over was enough to fool Joaquin Fernandez as the Croatian guided a fourth into the far corner.