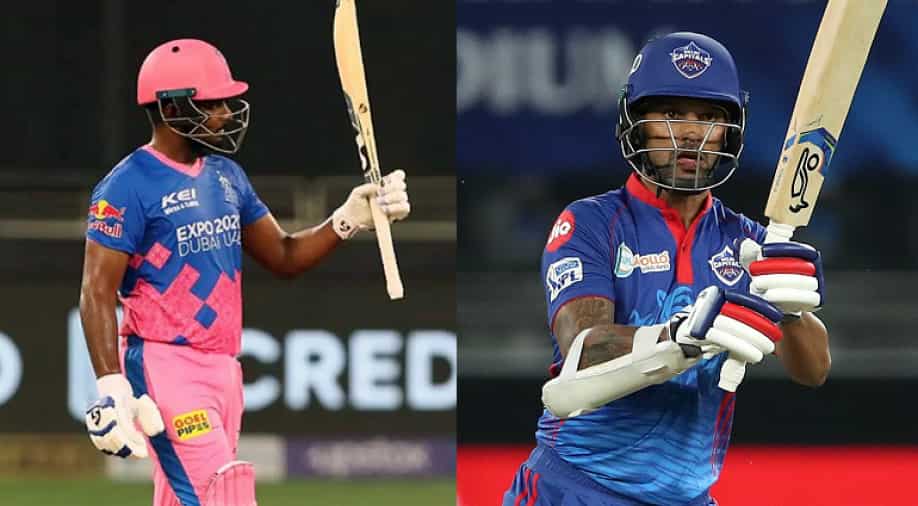 Sanju Samson pipped Shikhar Dhawan in the race for Orange Cap on Monday to move to the top spot on the list of highest run-getters in IPL 2021 so far. Here is a look at the top five run-getters so far this season.

Rajasthan Royals (RR) captain Sanju Samson toppled Shikhar Dhawan on the list of highest run-getters in the ongoing Indian Premier League (IPL) 2021 with a brilliant knock of 82 runs against Sunrisers Hyderabad (SRH) on Monday. Samson is now leading the race for Orange Cap this season and also completed 3,000 runs in IPL en-route to his 82 off 57 deliveries.

Samson once again single-handedly led RR's fight with the bat in their clash against a struggling SRH at the Dubai International Stadium in Dubai on Monday. His 57-ball 82 was laced with seven fours and three sixes as the RR captain powered his side's to a fighting total of 164 runs on the board in 20 overs.

However, Samson's knock went in vain as SRH chased down the target with 9 balls to spare. Jason Roy provided SRH with a cracking start with a 42-ball 60 before skipper Kane Williamson scored a fine 51 off 41 balls to take SRH home in the run-chase. Nonetheless, Samson became the top run-getter in the league and got his hands on the Orange Cap.

Here is the list of the top five run-getters in IPL 2021 so far:

Rajasthan Royals skipper Sanju Samson is on the top spot in the slite list with 433 runs in 10 games at an impressive average of 54.12 and a brilliant strike rate of 141.96. The youngster, who is not part of India's squad for T20 World Cup 2021, is making the right noises after his snub.

Interestingly, the current top two run-getters in IPL 2021 are both not part of India's squad for T20 World Cup 2021. Dhawan, who was also snubbed from the 18-man squad, is currently at the second spot. He has amassed 430 runs in ten matches so far in IPL 2021 and is likely to regain the top spot in Delhi Capitals' next game as he is only 3 runs behind Samson.

KL Rahul has once again been the lone warrior for Punjab Kings this season. He has continued his consistent run in the tournament and is currently placed third on the list with 401 runs from nine matches. He has struck at 135.01 and averages an impressive 57.28 at present.

Faf du Plessis has been one of Chennai Super Kings best batsmen s far this season. In the absence of Shane Watson, who retired from cricket last year, Du Plessis has formed a formidable opening partnership with Ruturaj Gaikwad and has delivered the goods for CSK. The veteran South African batsman is 4th on the list with 394 runs from ten matches at an average of 49.25.

Another CSK star on the list, Ruturak Gaikwad has been a revelation for CSK. The young opening batsman has showcased amazing consistency and has performed well against some of the best bowlers in the tournament. Gaikwad is the fifth-highest run-getter so far in IPL 2021 with 362 runs from ten matches at an average of 40.22 and a strike rate of over 137.