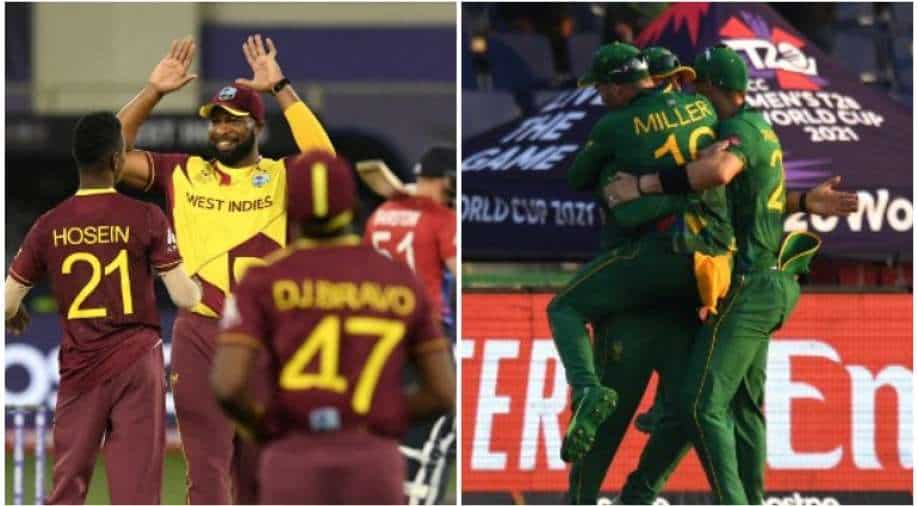 T20 World Cup 2021: On Tuesday (October 26), South Africa and West Indies will lock horns with each other to get off the mark in the Super 12 round.

On Tuesday (October 26), the T20 World Cup 2021 edition will see a doubleheader as South Africa will lock horns with West Indies at the Dubai International Cricket Stadium, Dubai in what will be the first game of the day. This will be followed by Pakistan's much-awaited face-off with New Zealand in the evening clash, at the Sharjah Cricket Ground, Sharjah.

Both South Africa and West Indies started their Super 12 round with defeats. While Temba Bavuma-led Proteas lost to Australia in an intense clash, in the last over, by 5 wickets, the defending champions Windies were thrashed by Eoin Morgan-led England by 6 wickets as they succumbed to the third-lowest total in T20 WC history after being 55 all-out.

While both sides are entering the contest on the back of defeats, they shouldn't be too worried as it is still the early stage of the tournament. The Windies, however, will be desperate to notch up a win as they have lost three matches in a row, including the two warm-up encounters. They can still draw some inspiration from the fact that they reduced England to 39/4 in defence of a paltry 56 in their opening game.

In head-to-head, Proteas lead the Windies 9-6 whereas they are also ahead in T20 WC with a 2-1 lead.

Match prediction for SA vs WI encounter: The Dubai surface will continue to challenge all the teams in the tournament. The batsmen will have to take some time initially in order to take on the bowlers. A par-score in Dubai is tough to predict but anything over 150-160 will challenge the chasing side. It will be interesting to see if the dew factor comes into play or not. SA to add to WI's miseries by earning their first win of the tournament?