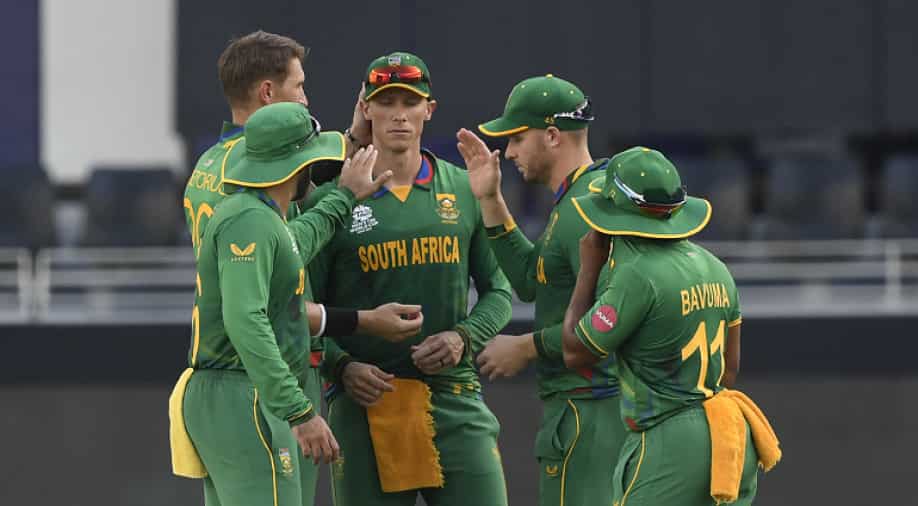 South Africa will lock horns with Sri Lanka in the T20 WC 2021 on Saturday. Photograph:( AFP )

South Africa will take on Sri Lanka in match no. 25 of the ongoing T20 World Cup 2021 on Saturday (October 30). Here is our prediction for the Group 1 encounter in Super 12.

South Africa will take on Sri Lanka in match no. 25 of the ongoing ICC T20 World Cup 2021 on Saturday (October 30). Both teams have so far recorded a win and a loss in their first two matches in the showpiece event. Both South Africa and Sri Lanka lost their respective opening matches before bouncing back to win their second game.

South Africa got the better of West Indies in their previous encounter to keep their top-four hopes alive while Sri Lanka defeated Bangladesh by five wickets. Quinton de Kock pulling out of the game against West Indies after refusing to take a knee to extend support for the Black Lives Matter (BLM) movement become the biggest talking point from South Africa's win against Windies.

However, De Kock has since issued a statement explaining his side and apologising for not taking a stand against racism. He has also made himself available for the remainder of matches for South Africa. De Kock remains one of the best batters in South Africa's line-up and his return will be a huge boost for the Temba Bavuma-led side.

While their bowlers failed to impress against Bangladesh, Sri Lanka batters produced a clinical show to chase down the target of 172 runs with seven balls to spare in Sharjah in their last game. Charit Asalanka slammed a brilliant unbeaten 80 off just 49 balls while young Bhanuka Rajapaksa scored a 3-ball 53 to take their side home comfortably.

For South Africa, Dwaine Pretorius and Keshav Maharaj shone with the ball to pick up five wickets between them while Rassie van der Dussen (43) and Aiden Markram (51) impressed with the bat to help them attain their first win in the tournament.

In a recent T20I series played between the two sides, South Africa had thrashed Sri Lanka 3-0 but will be wary of the Islanders, who can spring a surprise on their day.

South Africa will undoubtedly start favourites against Sri Lanka with a head-to-head record of 11-5 in T20Is and 2-1 when it comes to T20 World Cup matches. However, Sri Lanka will be riding high on confidence after a massive win over Bangladesh in their last game and might surprise the Proteas. We are backing Sri Lanka to win this.