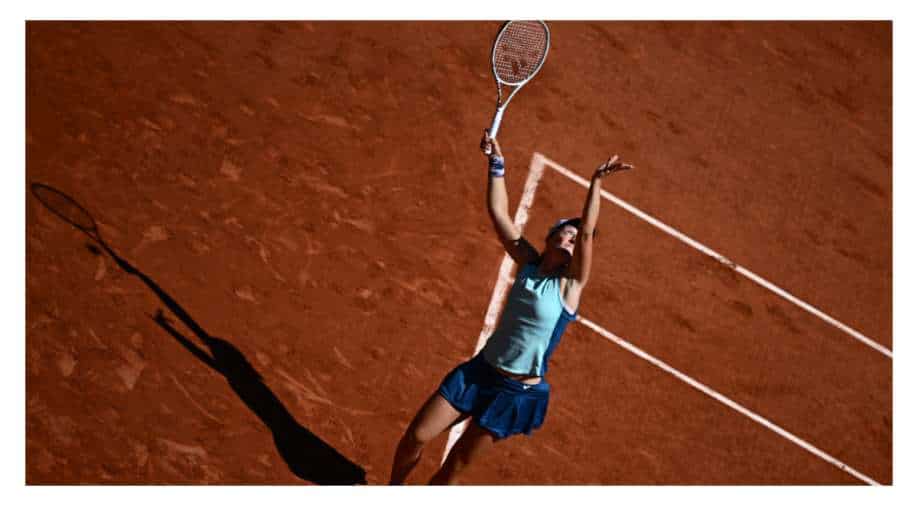 Poland's Swiatek, the 2020 champion, has not lost since February and has matched Serena Williams' winning run from 2013, having now lost only two sets in her last four tournaments.

Iga Swiatek continued her march towards a second French Open title in three years when she demolished Russian Daria Kasatkina 6-2 6-1 to reach the final and extend her winning streak to a jaw-dropping 34 on Thursday. The world number one conceded an early break, but made the most of Kasatkina`s string of unforced errors, peppering court Philippe Chatrier with winners.

Poland's Swiatek, the 2020 champion, has not lost since February and has matched Serena Williams' winning run from 2013, having now lost only two sets in her last four tournaments. She will meet either American teenager Coco Gauff, the 18th seed, or Italy`s Martina Trevisan in Saturday`s showdown.
Swiatek again played with a ribbon in the colours of the Ukrainian flag pinned to her hat against her Russian opponent.

Russian and Belarusian players are allowed to compete at Roland Garros but will have to sit out Wimbledon as All England Club officials barred competitors from the two countries due to Russia`s invasion of Ukraine, which Moscow calls a "special military operation". Belarus has been a key staging area for the invasion.
"Pretty special moment. Yeah, I`m really emotional. I`m so grateful to be in this place and you know, be healthy and be able to play my game. It`s amazing and I love playing here," said Swiatek.

"Right after my first year there was COVID and I was not able to see how many Polish people would come. It`s overwhelming. "I try to treat every match the same way. When I realise this is one of the biggest matches of the season, it could stress me out."

Swiatek started with a double fault but held and broke in the second game, only for Kasatkina to break back and level for 2-2. The Russian`s game, however, was riddled with unforced errors and Swiatek collected free points to steal her opponent`s serve again for 4-2. She then won eight points in a row to wrap up the opening set with a crosscourt backhand return that left Kasatkina with her feet stuck on the red dirt.
Swiatek, looking to become the fourth woman since 2000 - after Justine Henin, Serena Williams and Maria Sharapova - to lift the Suzanne Lenglen Cup twice, kept her foot on the gas to take the early lead in the second set.

But Kasatkina, who had lost all their three encounters in straight sets this season, stemmed the bleeding with a hold for 1-1. It was only a brief relief for the world number 20, who was being bludgeoned by Swiatek`s precise and powerful forehands. The top seed won all the remaining games, allowing a sorry Kasatkina only nine points in the second set, and finished it off with an ace.