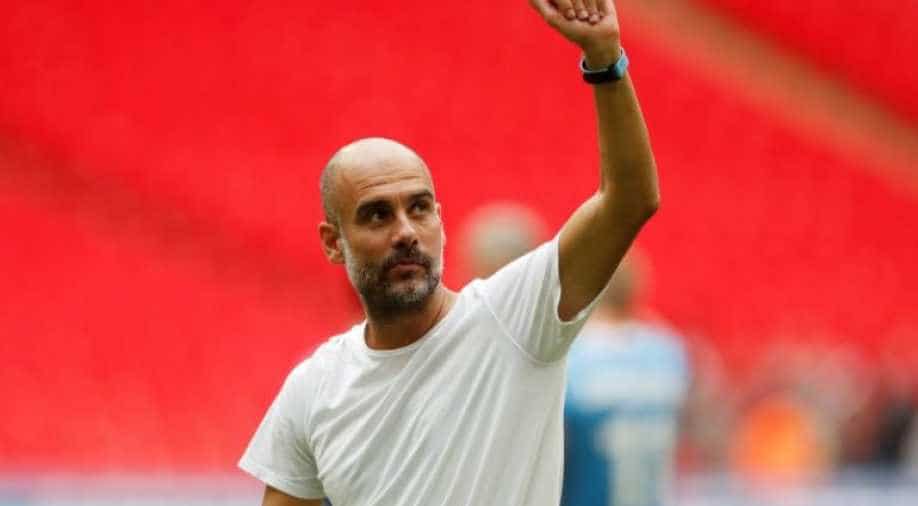 City missed a chance to celebrate on the pitch at the weekend, losing 2-1 at home to Chelsea with United keeping them waiting by winning at Aston Villa.

Manager Pep Guardiola hailed "relentless" Manchester City after they clinched the "hardest" of his three Premier League titles on Tuesday, sparking wild celebrations among supporters who had gathered outside the Etihad Stadium.

City were handed the title when arch-rivals and nearest challengers Manchester United lost 2-1 at home to Leicester, leaving Guardiola's side 10 points clear with three games remaining.

"This has been a season and a Premier League title like no other. This was the hardest one," said Guardiola after City became English champions for the seventh time -- five titles coming in the past nine years.

City missed a chance to celebrate on the pitch at the weekend, losing 2-1 at home to Chelsea with United keeping them waiting by winning at Aston Villa.

But two days later they were able to savour a title triumph that is all the sweeter given the obstacles they have overcome in a coronavirus-condensed campaign played mostly without fans.

"We will always remember this season for the way we won. I am so proud to be the manager here and of this group of players," said Guardiola.

It was City's second trophy in a little over two weeks after beating Tottenham in the League Cup final.

"They are so special. To come through this season, with all the restrictions and difficulties we've faced, and show the consistency we have is remarkable. It is relentless."

With coronavirus restrictions to be eased next week, there will be up to 10,000 fans in the Etihad Stadium to see City lift the trophy after their final home game with Everton on May 23.

In the meantime, hundreds celebrated in the streets outside City's stadium, letting off blue flares, waving banners and joyously chanting.

"It feels amazing, the greatest feeling is winning the Premier League. Better than any other in football. Love it!" City fan Graham Warner told AFP.

The club joined the celebrations by unveiling a giant sky blue banner on the outside of the stadium with the slogan "CHAMPIONS" above a picture of the team celebrating.

Since being taken over by the Abu Dhabi Group in September 2008, City have become the dominant force in English football, winning five Premier League titles, two FA Cups and six League Cups.

This is the third time City have clinched a Premier League and League Cup double, and they also won a domestic treble in 2018/19 by adding the FA Cup.

They can secure another treble later this month, having reached their first Champions League final by beating Paris Saint-Germain in the semi-final last week.

They will face Chelsea on May 29, with the venue likely to be switched from Istanbul to either Portugal or England so some fans can attend.

"Pep Guardiola is the greatest manager in the history of English football. And hopefully we're going to cap it all in a couple of weeks with the big one," City supporter Charlie Hibber said.

"We will enjoy this moment and we hope the fans do too," said the Brazilian midfielder.

"Rest assured we will continue to do everything we can to bring the Champions League home this season."

Alongside a picture of him celebrating with team-mate Rodri, Aymeric Laporte wrote on Twitter: "CHAMPIONNNNES CHAMPIONNNNES OLE OLE OLE."

Kevin De Bruyne posted: "Another One", while Raheem Sterling tweeted: "What's that smell?" before following with: "IT'S THE CHAMPIONS BABYYYY."

Prolific Argentina forward Sergio Aguero, who is leaving at the end of the season after 10 years at the club, wrote: "Champions! Proud of this team! Five #PremierLeague titles with #ManCity."

Leicester and United has been locked 1-1 at Old Trafford until Caglar Soyuncu's towering second-half header ensured City could pop the champagne with three games to spare after an uncharacteristically slow start because of the lack of a proper pre-season.

City won just five of their opening 12 Premier League games but Guardiola masterminded such a superb recovery that the title race became a procession, giving him three Premier League crowns to go with three La Liga trophies with Barcelona and three at Bayern Munich in the Bundesliga.

"At the start of every season, the Premier League is the most important title for us. This is the one where you have to be there every three days, playing all your rivals home and away," Guardiola said.

"Only by being the very best, week in week out, can you win this competition. It is a huge success."