Real Madrid fumble their way to victory over Valencia 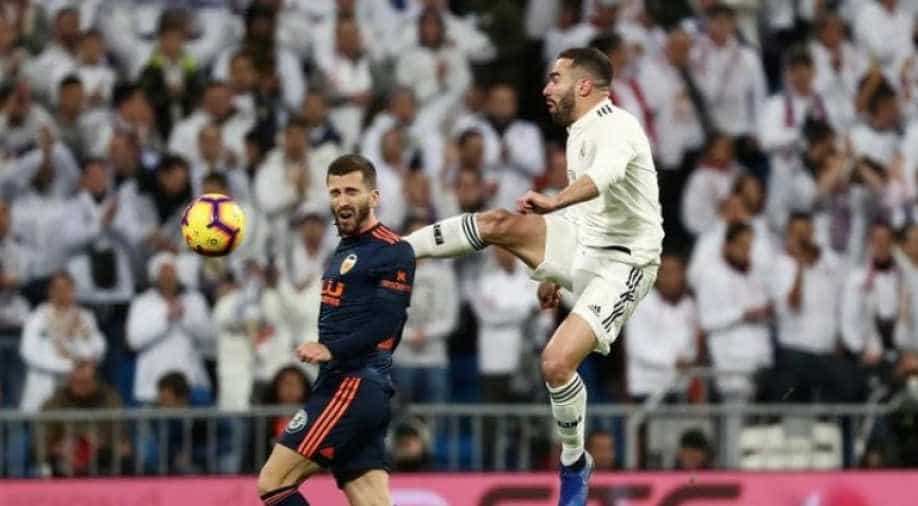 The win enabled Real to capitalise on Espanyol's 3-0 defeat at Getafe and leapfrog the Catalans into fifth place on 23 points, three behind La Liga leaders Sevilla who visit Alaves on Sunday and two from champions Barcelona, who host Villarreal.

Real Madrid produced another unconvincing display on Saturday but rode their luck to earn a 2-0 win at home to Valencia which allowed them to climb to fifth in the La Liga standings and soothe their recent troubles.

The European champions, who were humbled 3-0 by tiny Eibar last week, took a fortuitous lead when Valencia midfielder Daniel Wass nodded a Dani Carvajal cross into his own net in the eighth minute after former Arsenal defender Gabriel Paulista had failed to clear the danger.

The visitors, knocked out of the Champions League in mid-week, let Madrid off the hook on three occasions in the second half when Santi Mina and Paulista failed to hit the target with glorious chances from inside the area.

Valencia's Michy Batshuayi was then denied by his fellow Belgian and former Chelsea teammate Thibaut Courtois in the Real goal and moments later, down the other end, Lucas Vazquez sealed a barely deserved yet vital win in the 83rd minute, completing a quick-fire counterattack spearheaded by the tireless Carvajal.

The win enabled Real to capitalise on Espanyol's 3-0 defeat at Getafe and leapfrog the Catalans into fifth place on 23 points, three behind La Liga leaders Sevilla who visit Alaves on Sunday and two from champions Barcelona, who host Villarreal.

Real's mood after last week's debacle in Eibar had been lifted by a 2-0 win over AS Roma which sealed top spot in their Champions League group.

They were missing Toni Kroos, Casemiro and Marcelo though Spain midfielder Isco returned to the squad after a highly-publicised exclusion against Roma but still did not make the line-up. Homegrown midfielder Marcos Llorente was rewarded for his mature display on Tuesday with another starting berth.

Llorente provided some much-needed balance to the team which has been lacking in the absence of usual anchor Casemiro, and Madrid controlled the first half without giving their fans much to get excited about besides their opening goal.

Valencia came out with renewed energy and spirit in the second half and took the game to Madrid but failed to keep their cool whenever they managed to find an opening.

"We are tired after two very demanding games but we're very happy with the victory," Carvajal told reporters.

"We had a very good first half then Valencia took a step forward in the second half and had a couple of chances but they left space open and we managed to finish them off."