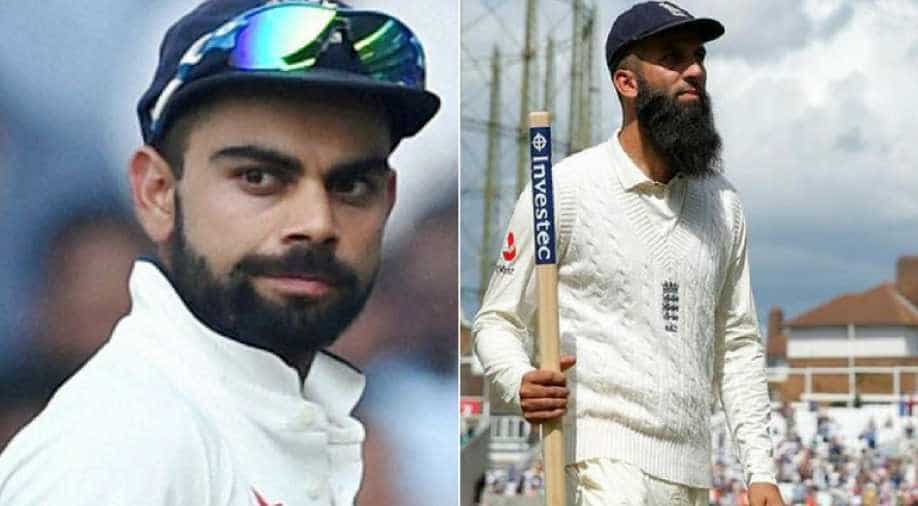 Some assumptions in the Surrey dressing room are sure to come crashing down when "proper big dog" Virat Kohli joins the side, said England all-rounder Moeen Ali as he reflected on the Indian captain's much-talked-about county stint next month.

While there aren't too many big local names in the Surrey squad, there are a few international stars in the line-up, headlined by South Africa's Morne Morkel, Tom Curran, Dean Elgar and Australia's Mitchell Marsh and Aaron Finch.

Moeen and his compatriot Chris Woakes are playing under Kohli for the Royal Challengers Bangalore in IPL.

"I know a few of the Surrey guys and they are not what people make them out to be a lot of the time. But if anyone in that dressing room does think they are a big dog, they will need to sit down for a little while because there is a proper big dog coming," Moeen was quoted as saying by 'The Guardian'.

Moeen and Woakes also rejected the perception that the Indian captain is intimidating and aggressive.

"You see him on the field and people might think he's arrogant but it is the complete opposite. He's so humble it is almost weird how nice he is. He's the biggest name in India but will ring me to check I'm OK or ask if I fancy lunch.

"Sometimes a player will invite the squad to their house for a meal and it would be easy for him to say no. But he would always go. I can say with certainty that anyone who has a bad word doesn't know the guy," he said.

Endorsing Moeen's view, Woakes added: "You have your perceptions of someone like Virat, who is quite passionate, emotional, in your face and plays it hard. But off the field he's very calm and you can chat about anything.

"He's very down to earth and for someone who has such huge pressures and public focus in India, to see him go about his business in this way quite refreshing."

Woakes went to the extent of saying that any other player of the team is irrelevant when Kohli is around.

"In my first year of IPL I found as an overseas player you get a lot of attention walking through airports in India. But having him in the team ? the No 1, the king ? we're almost irrelevant.

"It makes you realise what his life is like. So county cricket will be much more chilled and he'll enjoy that. Playing at smaller grounds, that will be an experience too. Having spoken to him about it, he loves touring other countries ? it's a release."

The English paceman also spoke of how Kohli approaches a match.

"Around 30 minutes before the bus leaves for a match, he does what he calls a ?priming session' in the gym. It's like a short burst of Olympic weightlifting.

"It's certainly different but it works for him. Overall, his fitness work is having a serious impact on the next generation of Indian players. He's leaner, fitter, more agile than those before."