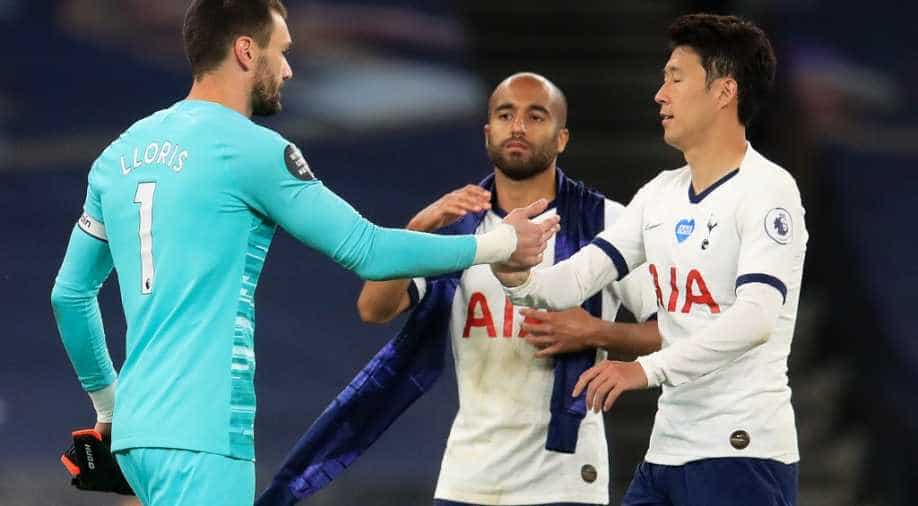 The match between Tottenham Hotspur and Everton in the Premier League saw a moment where Spurs goalkeeper Hugo Lloris and Son Heung-min confronted the latter while shouting and shoving his shoulder before being separated by teammates in what was a furious row on Monday.

The match between Tottenham Hotspur and Everton in the Premier League saw a moment where Spurs goalkeeper Hugo Lloris and Son Heung-min confronted the latter while shouting and shoving his shoulder before being separated by teammates in what was a furious row on Monday.

The usually calm Son responded angrily and charged towards Lloris before being kept apart by teammates Harry Winks and Moussa Sissoko as the altercation threatened to boil over. The French goalkeeper was furious after Son failed to close down a loose ball in the midfield before Everton attacked the goal through Richarlison.

Hugo Lloris & Son clashing with each other at half-time 😳 pic.twitter.com/jjVeKy36AR

"I think to concede a chance a few seconds before half-time because we didn't make a press annoyed me. But yeah, that's football," Lloris said.

However, both Son and Lloris hugged it out before the start of the second half and event at the final whistle as Tottenham secured their second win since the restart.

"It just belongs to the changing room. Outside you can say whatever you want. What happened is just part of football sometimes," Lloris said.

"Let's be honest, we are in a situation we are not happy with so we have to fight, to make sure we all go in the same direction. Most important is to stay focused on the team. We can only do it as a team. When you play a season like this one it's very easy to fall apart but we showed we are still together. There is no problem at all. You could see after the game we were fine."

Whereas, when asked about the face-off, manager Jose Mourinho was “delighted” as it showed a desire to win. In a typical Mourinho style, the Portuguese said a team of nice boys can only win the Fair Play Cup, which he has no interest in winning.

"That's beautiful. It's probably as a consequence of our meetings, so if you want to blame someone blame me," he said.

"I asked them to demand more from each other and put colleagues under pressure. It was the situation of the first half where an amazing kid, a team boy like Sonny, that the captain thought 'you have to do more'.

"A team of nice boys, the only thing they can win at the end of the season is the Fair Play Cup. Something I have never won and have no interest in winning.

"What happened should not happen on the pitch, it should happen inside the dressing room, but I promise you my winning teams we had big fights in the team."

Tottenham Hotspur’s second win in their last 10 games in all competition made them jumped to eight spot, one point behind arch-rivals Arsenal.