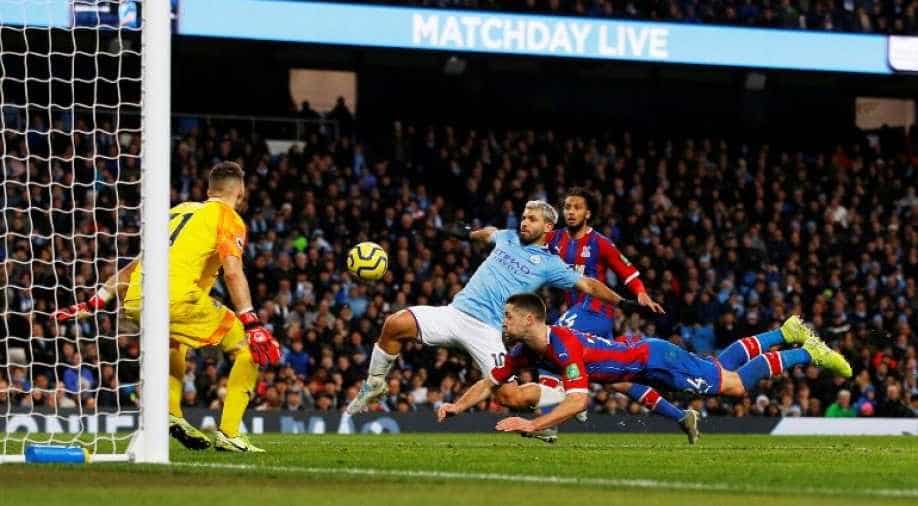 The result leaves City 13 points behind leaders Liverpool, who have two games in hand and host Manchester United on Sunday.

Crystal Palace grabbed a last-minute equaliser, through a Fernandinho own goal, to earn a 2-2 draw at Manchester City in the Premier League on Saturday after two goals from Sergio Aguero looked to have given the champions victory.

The result leaves City 13 points behind leaders Liverpool, who have two games in hand and host Manchester United on Sunday.

Palace, who won this fixture last season, took the lead through new signing Cenk Tosun in the 39th minute, the Turkish forward, on loan from Everton, heading home at the back post after Gary Cahill had nodded a corner across the area.

All that late goal drama...

City dominated but wasted the chances that came their way, Bernardo Silva blasting over from inside the box and, after the interval, Raheem Sterling shooting wide after breaking into the area.

Pep Guardiola thought his side had a penalty in the 71st minute when the referee ruled Jairo Riedewald had handled a Joao Cancelo cross, but the VAR review overturned the decision after it showed the ball had struck his leg before bouncing against his arm.

City finally got on level terms in the 82nd minute when Aguero slid in at the back post to convert a Gabriel Jesus ball for his 250th goal for the club in all competitions.

Minutes later the Argentine made it 2-1 with a fine, angled header from a Benjamin Mendy cross from the left.

But Palace grabbed a point after Wilfried Zaha powered past John Stones and his cross deflected in off Fernandinho and beat City goalkeeper Ederson.

It was City's third draw of the season and, combined with their five defeats, their bid for a third straight title now seems to be mostly a case of hoping for a miracle.

"It was a tight game and unfortunately we could not win it," said Guardiola.

"I told them (at half-time) to keep going. Put more balls into the box and try to control Zaha on the counter-attack. It's difficult to analyse when they shoot one corner, have no more chances, and we did many times and unfortunately could not win. We take it one game at a time," said the Spaniard.

The point moves Palace up to ninth place on 30 points and Tosun, who had struggled to make an impact at Everton, was delighted with his debut goal.

"To score was a great feeling as a striker needs confidence, and confidence comes with scoring goals," he said.

"We played a solid game, knew City would have more possession, but we scored a good two goals and I'm just glad I got one of them.

"It's a great feeling to score a goal in my first game but more than the goal was the point - that’s what mattered today."