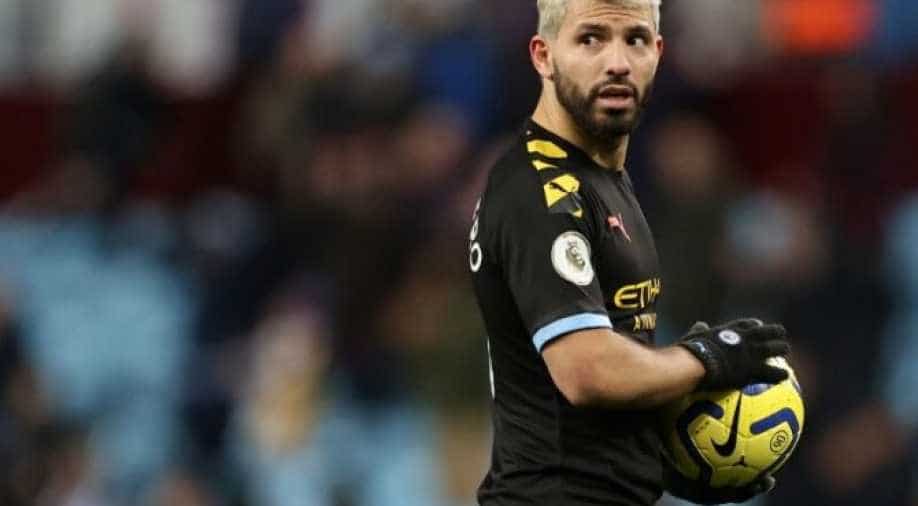 Sergio Aguero celebrates with the match ball at the end of the game Photograph:( Reuters )

The Argentine striker struck the third, fifth and sixth goals as City ran riot at Villa Park, taking his league tally to 177, two more than Frenchman Thierry Henry managed for Arsenal and joint-fourth on the all-time list alongside Frank Lampard.

Slick City's resounding victory, in which Riyad Mahrez also scored twice and Gabriel Jesus once, meant they moved above Leicester City and trimmed Liverpool's lead to 14 points, although Liverpool has played a game less.

While Liverpool looks uncatchable, City displayed the kind of devastating attacking football that makes them, on their day, the most eye-pleasing team in England.

It was also a day for the 31-year-old Aguero, who signed for City in 2011, to confirm his status as one of the best imports ever to play in England's top flight.

In bagging a 12th Premier League hat-trick he surpassed the 11 of Alan Shearer with whom he had shared the record.

"Aguero is a legend and the legend rose tonight," City manager Pep Guardiola said. "I think he is one of the most incredible players I've seen in this league.

"The team is proud. We congratulated him in the locker room because to score this amount of goals and hat-tricks means you have done, for many years, a lot of good things. He has been consistent for many, many years."

While the day belonged to Aguero, it was Mahrez who put City in complete control with the opening two goals.

His dribble and shot caught out Villa keeper Orjan Nyland at his near post after 18 minutes and the Algerian struck again from close range six minutes later after Villa debutant Danny Drinkwater was caught in possession.

With Villa ripe for the picking Aguero got in on the action in the 28th minute when he was given far too much time to smash a shot that flew through the hands of Nyland.

It was 4-0 on the stroke of halftime when Kevin De Bruyne advanced down the right and delivered a superb pass that took out Villa's defence, allowing Jesus to tap in.

Villa had dropped into the relegation zone before kickoff after Watford's win at Bournemouth and their afternoon was to get worse in the second half.

A razor-sharp Aguero moved clear of Henry when he danced across the area to score right-footed in the 58th minute and he continued to torment a sorry home side by ramming home his third after 81 minutes.

Villa, who have fallen to third from bottom, did not manage a shot on target until they were awarded a stoppage-time penalty after lkay Gundogan tripped Trezeguet.

Anwar El Ghazi tucked it away with the last kick of the game but it barely raised a smile.

RR vs KKR, IPL 2020 Live Streaming: When and where to watch Rajasthan Royals vs Kolkata Knight Riders?