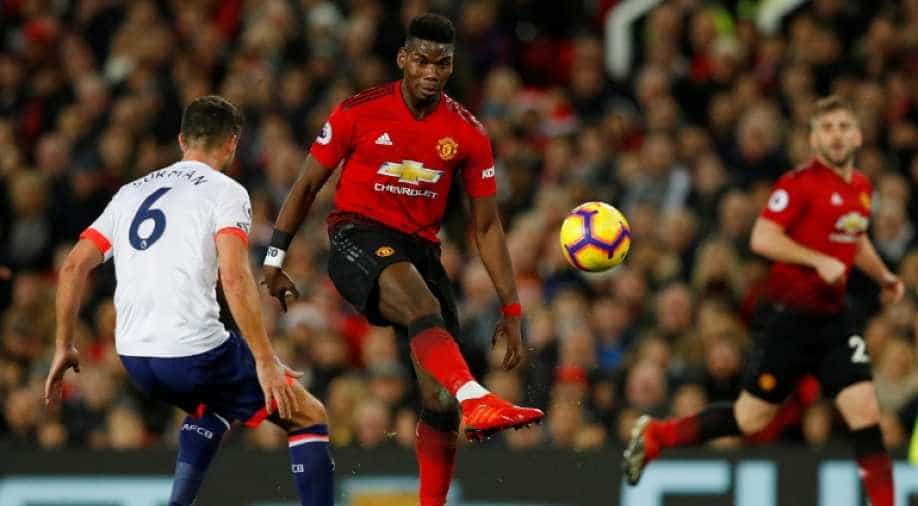 The re-born Paul Pogba scored twice, for the second time since Jose Mourinho's departure from the club, as Manchester United beat Bournemouth 4-1 to make it three wins in a row for caretaker boss Ole Gunnar Solskjaer.

After emphatic wins over Cardiff City and Huddersfield Town, the manner of the victory was further evidence of the return of attacking football under Solskjaer and of the liberated way in which the players are performing.

None seem to be relishing their football again more than World Cup winner Pogba, who has netted four of the 12 goals that rejuvenated United have scored in the three matches since their former Norwegian striker took the reins.

It took Pogba just five minutes to strike for sixth-placed United, sliding the ball in at the back post after a wonderful piece of dribbling and a precise low cross from Marcus Rashford.

The Frenchman, who scored twice against Huddersfield Town on Boxing Day, then burst into the box to head home an Ander Herrera cross from deep to make it 2-0.

"It is different, we still won games with the old manager but it is just a different style of playing," said Pogba.

"We are more offensive and we are creating more chances and that is how we want to play. I always want to do more, but I want to play for the team and play simple."

Not only was Pogba appearing in more advanced positions but he looked back to his confident self on the ball, strutting while in possession and constantly looking to create.

Bournemouth pulled a goal back in stoppage-time at the end of the first half though when David Brooks skipped around the United defence and placed a cross on the head of Nathan Ake who nodded past David De Gea.

Romelu Lukaku made it 4-1, two minutes after coming on as a 70th-minute substitute, latching on to a Pogba through ball and hooking the ball past the advancing Asmir Begovic.

Pogba was inches away from a hat-trick with a low drive from 20 yards out that struck the post.

The relaxed and positive mood was slightly undone by a wild lunge in the 79th minute from United defender Eric Bailly on Ryan Fraser, with the Ivorian rightly being shown a straight red card.

"In the first half we attacked the game with a high tempo and high energy but the response to their goal was great. We managed the game much better than against Huddersfield," said Solskjaer.

"We are still looking for a clean sheet - you can't switch off for one second in this league.

"It's a very very good performance, the crowd was enjoying it but now Newcastle, the next one, is a different kind of test."