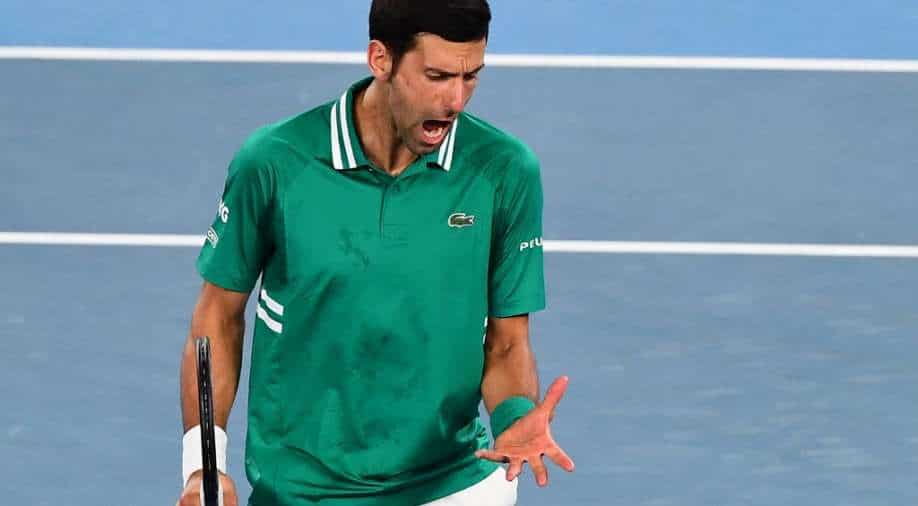 Novak Djokovic says it's a "gamble" to keep playing the Australian Open and his abdominal injury could have an impact on the rest of his season, but the world number one is prepared to take the risk.

Novak Djokovic says it's a "gamble" to keep playing the Australian Open and his abdominal injury could have an impact on the rest of his season, but the world number one is prepared to take the risk.

The Serbian eight-time champion sustained a "muscle tear" during a thrilling five-setter against Taylor Fritz on Friday.

He didn't train the following day but took to Rod Laver Arena Sunday evening dosed up on painkillers to see off the threat posed by big-serving Canadian Milos Raonic over four sets and make the quarter-finals.

Djokovic said the pain was "bearable" and he "somehow managed to find a way and win".

But he is not planning to train again on Monday, instead working on his recovery ahead of his last-eight clash with sixth seed Alexander Zverev.

"I mean, it's kind of a gamble, that's what the medical team told me. It's really unpredictable, you can't know what's going to happen with you once you're on the court," he said.

"You're not gonna save yourself or think about going for that point or this shot or that shot. It just pulls you. It's normal. Playing at this level, you just want to give it your all.

"It could cause much more damage than it is at the moment, but also could go in a good direction."

The 33-year-old refused to say what exactly the problem was, although his abdomen was strapped against Raonic and he said after the Fritz clash that was it "a tear of the muscle".

"I know what it is, but I don't want to talk about it now. I'm still in the tournament," he said, conscious that he does not want to give Zverev any extra ammunition to target him.

"I hope you guys understand that. I don't want to speculate too much about it."

Djokovic's win against Raonic was his 300th at a Slam, only the second player in history to reach the mark after Roger Federer, who has 362.

It kept him on track for an 18th Grand Slam title in his bid to close in on the 20 held by the Swiss great and Rafael Nadal.

His drive for more Slam crowns is the reason he hasn't pulled out, making clear that if it was any tournament other than a Grand Slam he would have withdrawn.

But playing on could mean he faces a period on the sidelines after Melbourne to recover.

"They all share the opinion that there is a slight, very slight, slim chance that I will make a significant damage that would take me out of the tour for whatever, some extended period of time.

"So, yes, there is always a risk that the injury will get worse, but they don't think it's going to be very significantly worse that it's going to jeopardise my entire season.

"So it will jeopardise, depending on how I go here, certain tournaments that are coming after Australian Open that I was maybe thinking to play."