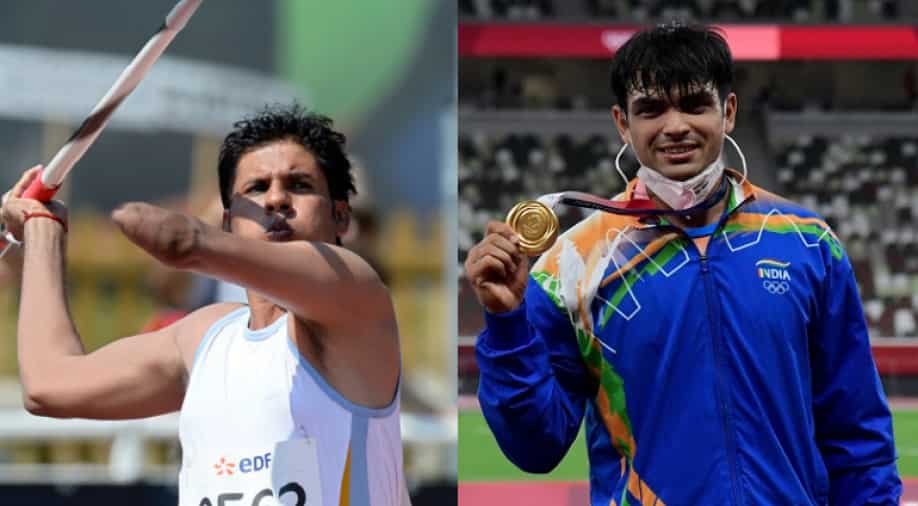 Neeraj Chopra and Devendra Jhajharia will be honoured with Padma awards. Photograph:( AFP )

India's golden boy Neeraj Chopra, who won the country's only gold medal at the Tokyo Olympics last year, is all set to be honoured with Padma Shri.

India's golden hero Neeraj Chopra will be honoured with the Padma Shri after his heroic performance at the biggest stage of them all last year. Chopra had become the first athlete from the country to win a gold medal in track and field after finishing on top of the podium in the final of men's javelin throw at the Tokyo Olympics 2020. He will be among the six sportspersons who will be conferred with the Padma Shri Award, India's fourth-highest civilian honour.

India's Paralympics legend Devendra Jhajharia, who is the first Indian to win two gold medals at the Paralympics, has been conferred with Padma Bhushan, India's third-highest civilian award. The Padma Bhushan is awarded for "distinguished service of a high order" in a particular field.

Neeraj scripted history at the Tokyo Games as he became India's only second individual gold medallist after Abhinav Bindra, who had won a gold medal in shooting in 2008. Neeraj came up with a monstrous throw of 87.5m in the final of men's javelin throw to etch his name in history.

Both Neeraj and Jhajharia will be presented the awards by Indian President Ram Nath Kovind on the eve of India's Republic Day on 26 January 2021. Apart from Neeraj, Indian women's hockey player Vandana Katariya, and Tokyo Paralympics gold medal winners Sumit Antil, Pramod Bhagat and Avani Lekhara will be conferred with the Padma Shri award.

"This year the President has approved conferment of 128 Padma Awards including 2 duo case (in a duo case, the Award is counted as one)," the Ministry of Home Affairs said in a statement.