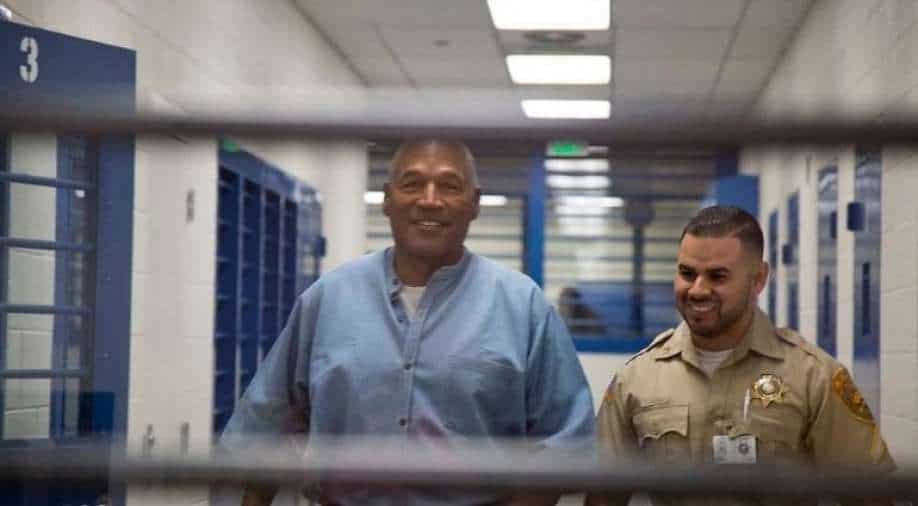 Simpson, who is now 74, was released from jail in Nevada in 2017, where he had served nine years for armed robbery Photograph:( AFP )

OJ Simpson was found liable for the deaths in a 1997 civil suit and ordered to pay $33.5 million damages to the family of Ron Goldman.

Simpson, who is now 74, was released from jail in Nevada in 2017, where he had served nine years for armed robbery in a case revolving around sports memorabilia. He had been due to finish parole in February.

"A decision to grant early discharge from parole was ratified on December 6, 2021. The Board awarded credits in an amount equal to the time remaining on the sentence to reduce the sentence to time served."

Simpson's soap opera public life began as a stand-out running back in college football, winning the coveted Heisman Trophy for the best player in the nation, before a stellar career in the NFL.

It morphed into lucrative success in movies and commercials.

Then in 1994, millions of Americans watched wall-to-wall TV coverage of Simpson traveling in a white Bronco driven by a friend, leading a police convoy along the highways of southern California as he fled over the suspected double murder of his ex-wife and her male friend.

Simpson was famously acquitted in 1995 by a Los Angeles jury in a case decried by many as a media circus that became known as the "Trial of the Century," with a cast of larger-than-life lawyers and drama over whether or not a glove found at the scene would fit him.

The verdict was greeted with disbelief by many Americans, with opinion on the Black athlete's guilt divided sharply along racial lines.

The case was turned into the Emmy-winning FX television series, "The People vs OJ Simpson: American Crime Story," which aired in 2016.

Simpson was found liable for the deaths in a 1997 civil suit and ordered to pay $33.5 million damages to the family of Ron Goldman who was stabbed to death alongside Simpson's ex-wife Nicole Brown Simpson.

Simpson maintains his innocence and has always denied he was trying to flee during the famous chase, even though he ignored a police deadline to turn himself in.

He told an LAPD detective over the phone during the slow-speed pursuit to "let them all know I wasn't running," but rather visiting Nicole's grave.

A duffel bag containing Simpson's passport and cash as well as a gun found by police in the car led many to question this, but was never submitted as evidence by the prosecution.

He later authored a book entitled "If I Did It," which proffered a hypothetical description of the murders.