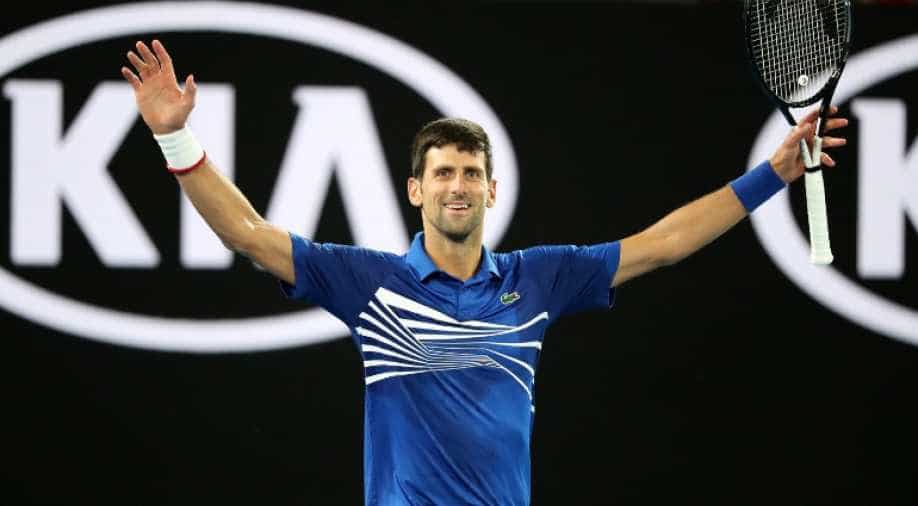 Djokovic won a record seventh Australian Open title and moved ahead of Pete Sampras as third on the men's all-time list of most Grand Slam titles (15) and probably more poignantly just two behind Nadal but Roger Federer is still out in front with 20.

Novak Djokovic underwent surgery to fix an elbow problem 12 months back and in the process seems to have also eradicated any remaining glitches in his game, handing out an incredible mauling to Rafa Nadal in the Australian Open final on Sunday.

With his record seventh crown at Melbourne Park, Djokovic moved ahead of Pete Sampras as third on the men's all-time list of most Grand Slam titles (15) and probably more poignantly just two behind Nadal.

Roger Federer is still out in front with 20 and the debate on the sport's greatest player has mostly centred around the Swiss master and the Spaniard.

But Djokovic has most certainly thrown his hat into that ring and the mark remains a motivation for him.

"Of course, it motivates me," said Djokovic, who earlier posed with his trophy for "the most beautiful and the most expensive" photograph of the night with four Australian tennis greats including Rod Laver and Roy Emerson.

"Playing Grand Slams, biggest ATP events, is my utmost priority in this season and in seasons to come. How many seasons are to come? I don't know. I'm not trying to think too much in advance.

"I do want to definitely focus myself on continuing to improve my game and maintaining the overall well-being that I have mental, physical, emotional, so I would be able to compete at such a high level for the years to come, and have a shot at eventually getting closer to Roger's record. It's still far."

In their last meeting at Melbourne Park seven years ago, the Serb needed a record five hours and 53 minutes to beat Nadal in the title clash in a match regarded as a classic.

On Sunday, he needed little more than a couple of hours to clinch his 15th Grand Slam trophy and third in succession after winning Wimbledon and the US Open. The victory also tied his career Grand Slam final meetings against Nadal at 4-4.

The biggest challenge for Djokovic this year will come at the French Open once again from Nadal, where the 32-year-old has won a record 11 titles.

"I have to work on my game, my claycourt game, a bit more, more specifically than I have in the last season," said Djokovic, who completed his first 'Nole Slam' in 2015-16.

"I am already playing better. But, I mean, clay specifically in order to have a chance and shot at the title. The ultimate challenge there is to win against Nadal."

The 31-year-old played like a man possessed as those present at the packed Rod Laver Arena, which boasted strong support for Nadal, were left shaking their heads in disbelief at his utter dominance.

Djokovic had five breaks of serve while conceding only a single break point against an opponent, who was yet to lose a set en route to the final.

He committed nine unforced errors while hitting 34 winners, often under pressure and off balance.

That was after giving away only five unforced errors in his semi-final thrashing of Lucas Pouille.

"Back-to-back semi-finals and finals, I think I made 15 unforced errors in total in two matches," he said. "It's quite pleasantly surprising to myself, as well, even though I always believe I can play this way, visualize myself playing this way.

"At this level, as I said, under the circumstances, it was truly a perfect match."