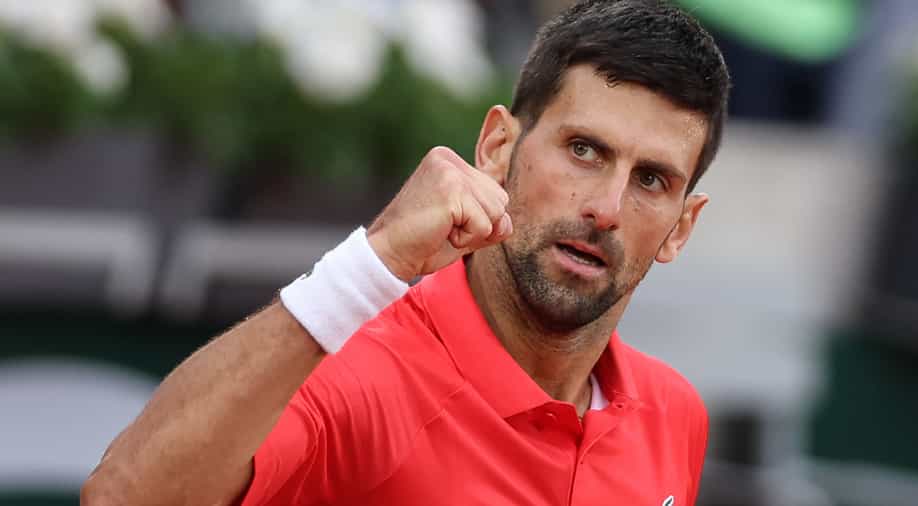 Novak Djokovic defeatd Slovakia's Alex Molcan in the second round of the French Open on Wednesday to keep his title defence on track.

World number one Novak Djokovic completed a solid 6-2 6-3 7-6(4) victory over Slovakia`s Alex Molcan in the second round of the French Open on Wednesday to keep his title defence and quest for a record-equalling 21st Grand Slam on track. With Djokovic unable to defend his Australian Open title due to his refusal to be vaccinated against COVID-19, Spaniard Rafa Nadal broke a three-way tie for the most Grand Slam titles with the Serb and Roger Federer by winning the Melbourne Park major at the start of the year.

Yet a successful rerun of his 2021 Roland Garros campaign, when he beat 13-time French Open winner Nadal in the semi-finals, will lift Djokovic alongside his great rival. On a blustery day on Court Suzanne Lenglen, the 35-year-old Djokovic cruised through the opening two sets, breaking Molcan`s serve three times without giving the Slovakian a single opportunity on his own delivery.

The 24-year-old Molcan, trained by Djokovic`s former long-time coach Marian Vajda, was ranked 255th when he went down in straight sets to Djokovic in their only previous meeting in Belgrade last May but since then the left-hander has climbed to a career-high ranking of 38th.

With nothing to lose, Molcan opened up his shoulders in the third set and with some aggressive all-court hitting managed to cancel out Djokovic`s early advantage to force a tiebreak.

But Djokovic then managed to go up a gear and converted his second matchpoint when the left-hander found the net with a return.

"It was a difficult match with a lot of winds, changing direction," he said on court. "You have to be fully focused.

"I have a lot of respect for Alex. He`s got a game that`s made for this surface. I hope it`s the last time I play against Marian Vajda as coach of my opponent."

The top seed will next meet Slovenia`s former world number 43 Aljaz Bedene for a place in the fourth round.