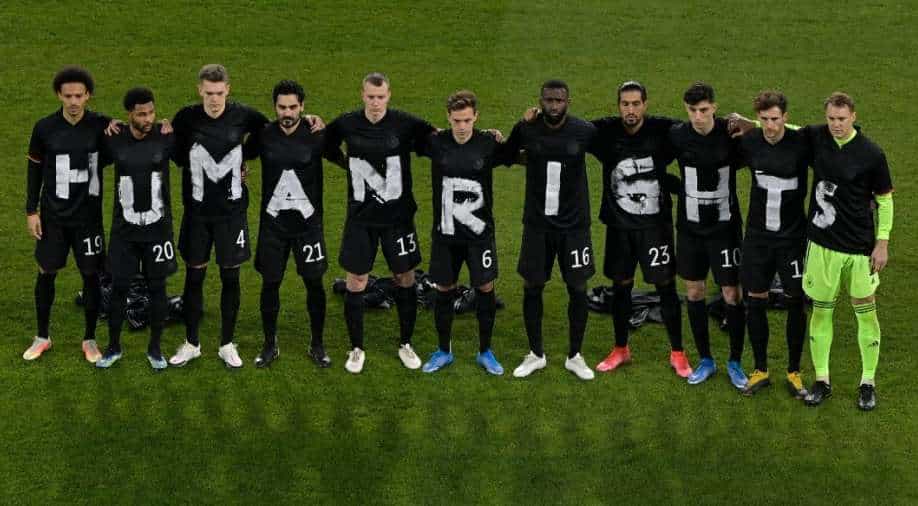 FIFA on Friday said it will not sanction the German national team for its T-shirt protest in support to human rights before the World Cup qualifier match against Iceland on Thursday.

FIFA on Friday said it will not sanction the German national team for its T-shirt protest in support to human rights before the World Cup qualifier match against Iceland on Thursday.

Germany head coach Joachim Loew said that he supported the players after the squad word black t-shirts with 'Human Rights’ written over it – aimed at 2022 World Cup host Qatar. Germany went on to defeat Iceland 3-0 but their stand got the footballing world talking.

"It was a sign that we stand up for all human rights in the world, no matter where," said Loew after the qualifier in Duisburg.

FIFA prohibits political statements during matches but the governing body told AFP's SID that they will not sanction the German national team.

"FIFA believes in freedom of expression and in the power of football to drive positive change," it said in a statement on Friday.

Earlier, Norway national team also staged a similar protest connected to human rights issues in Qatar. And FIFA responded by saying it will not penalise Norway for the protest.

Notably, Human rights groups have been critical of Qatar over its treatment of migrant workers. However, Qatar disputes the claims.

The German government in Berlin welcomed the national team's protest in "making it clear once again what values they stand for," said Chancellor Angela Merkel's spokesman Steffen Seibert on Friday.

"That's something good because the national team" represents Germany, and so "it's good if it professes the values of our liberal democracy," Seibert added.

Freitag welcomed the stance but pointed out that it put the Bayern Munich players involved "in a difficult situation" as Qatar's national airline sponsors the club world champions.