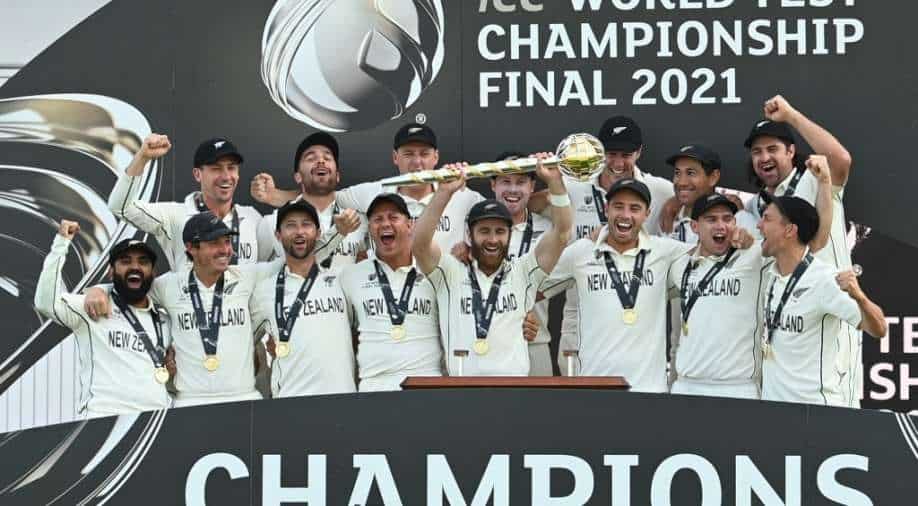 The Black Caps, who ended up as the runners-up in 2019 World Cup, continued to build on the improvement in the longest format and enjoyed a brilliant World Test Championship cycle, especially at home.

In a match dominated more by the bowlers, the New Zealand pace quarter stood up with Kyle Jamieson shining the brightest with a five-wicket haul in an ICC final. While Jamieson picked up seven wickets, Tim Southee and Trent Boult ended up with five wickets each. Neil Wagner’s wicket column might show just three wickets, they were crucial to strengthen New Zealand’s stronghold in the match.

New Zealand, after inviting India to bat first, had a tough opening hour with Indian openers Rohit Sharma and Shubman Gill stomping their authority early. However, Wagner and Jamieson turned it around. Cheteshwar Pujara and Virat Kohli stitched a partnership, albeit slow, India steadily found them in a better place. A Trent Boult special in-swinger got rid of Pujara, followed by the quick dismissal of Kohli at 44.

Ajinkya Rahane, who looked the best out of any Indian batters, had a brain-fade moment and miscued a regular pull shot for his dismissal.

Ravindra Jadeja, Ravichandran Ashwin added 15 and 22 respectively by playing counter-attack cricket but India’s tail failed to wag. The Virat Kohli-led outfit was bundled out for 217.

New Zealand openers Devon Conway and Tom Latham gave a solid start to the Kiwis with 54 and 30 respectively. Kane Williamson played the captain’s knock of 49 at a time the middle-order collapsed. The all-rounders and tail come to the rescue and added crucial runs at the end. Jamieson scored 21, Southee 30, breaking six-hitting records.

Mohammed Shami stood out from the Indian pack with four wickets, including breathtaking spells of bowling. Ishant capped it up with three while Ashwin ended up with two. Jasprit Bumrah’s off form would bother India a bit but one can expect a bowler of Bumrah’s caliber to go through it for long.

After rain delays, India’s batting cracked in the second innings with Jamieson running it past the Indian batting unit. Only Pant with a topsy-turvy 41-run knock stood out, while Rohit Sharma saw off the new ball well with 81-ball 30.