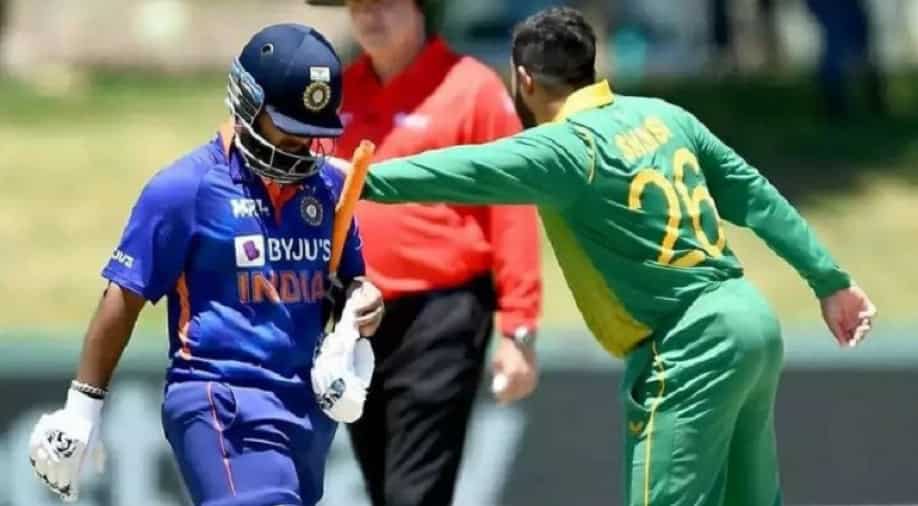 Tabraiz Shamsi shared a picture with Rishabh Pant after dismissing him in 2nd ODI. Photograph:( Twitter )

South Africa spinner Tabraiz Shamsi shared a heartwarming post on social media on his aggressive celebration after dismissing Rishabh Pant in the second ODI on Friday.

South Africa spinner Tabraiz Shamsi upheld the spirit of cricket with his heartwarming post after dismissing Rishabh Pant in the second ODI between India and South Africa at the Boland Park in Paarl on Friday. Pant had a brilliant outing in the game as he top-scored for India with a stunning knock of 85 runs off 71 balls. The left-hander looked in amazing touch and took the Proteas bowlers to the cleaners during his sensational innings.

After opting to bat first in the must-win game, India were off to a decent start with a 63-run stand between openers KL Rahul and Shikhar Dhawan before losing Dhawan and Virat Kohli in quick succession. India were in desperate need of a good partnership when Rahul and Pant combined to steady the ship for the visitors.

While Rahul played the anchor's role to perfection, Pant took the aggressive route and went after the South African bowlers. He enjoyed a great battle with Proteas spinner Shamsi and took him to the cleaners in his initial overs. Pant's onslaught forced South Africa skipper Temba Bavuma to take Shamsi off the attack.

He was brought on later and the move paid off as Shamsi finally managed to dismiss Pant in his 4th over. The spinner celebrated aggressively but didn't forget to laud Pant for his fantastic knock. Shamsi was seen giving Pant a pat on his back for his brilliant knock after dismissing him.

A day after the game, Shamsi took to social media to post a picture of himself with Pant and wrote a heartwarming message. "Work hard... play hard.... but never cross the line," Shamsi captioned the picture where he can be seen appreciating Pant for his 85-run-knock.

Also Read: 'There are people against him': Shoaib Akhtar on Virat Kohli's decision to quit India's Test captaincy

Pant's knock, however, went in vain as India failed to defend the total of 287 runs and lost the game by seven wickets. It was a disappointing show from the Indian bowlers as South African batters dominated the proceedings in the run-chase. Openers Janneman Malan (91) and Quinton de Kock (78) slammed half-centuries apiece to post a 132-run stand for the first wicket and take the game away from the visitors.

South Africa chased down the total with eleven balls to spare and won the game convincingly by seven wickets to take an unassailable 2-0 lead in the three-match series.