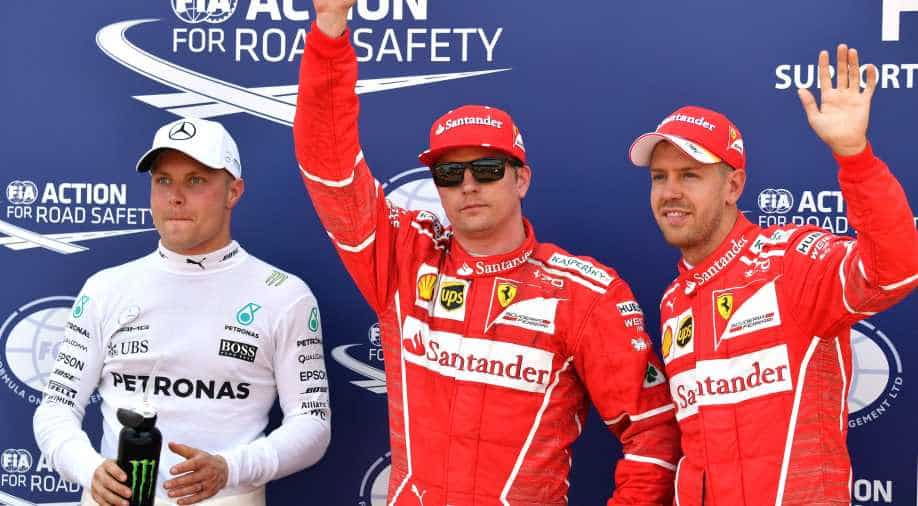 Kimi Raikkonen secured his first pole for nine years and Ferrari a first front row lockout at the Monaco Grand Prix since 2008 after qualifying for Formula One's glamour race on Saturday.

The Italian team's domination that left Lewis Hamilton struggling to take 14th for Mercedes sparked celebration from the tifosi perched on terraces below the Monegasque palace.

As softly-spoken Raikkonen savoured his first pole since the 2008 French Grand Prix, just weeks after he had been second behind Felipe Massa on the Monte Carlo grid, Hamilton knew he faced a daunting challenge in Sunday’s classic 78-laps race around the Mediterranean street circuit.

The 37-year-old Finn had not taken pole for 128 races, but dominated the afternoon’s action to clock a fastest lap of one minute and 12.178 seconds, a new record for the circuit and an endorsement of the speed of this season’s new era machines.

That left him 0.043 seconds ahead of the world championship leader and three-time champion Vettel who in turn was just two-thousandths of a second faster than third-placed Valtteri Bottas of Mercedes.

The Finn’s Mercedes team-mate, three-time champion Hamilton, who is six points behind Vettel in the title race, failed to make the cut for the top ten shootout, qualifying 14th after a miserable afternoon.

"We’ll try to make the best of it tomorrow… Yes, of course it is good, but here it is all about the fine details.”

"I don’t know what was wrong there," said Vettel of Mercedes’ problems. “But this is one of my highlights of the season – to race at Monaco. It is a difficult one to get right, but if you do, it is great…”

Like Raikkonen, Vettel stressed that he and the ‘iceman’ would be free to race and not constrained by team orders, in advance, at the first corner. “We are here to race,” said the German. Raikkonen, obediently, reminded reporters that both men raced for the same team – Ferrari.

Hamilton was crestfallen. “The opportunity was not there for me today,” he said. “I just struggled with the car.

"I don't really know what to say at the moment. I'm deflated, but will keep pushing tomorrow.

“That's pretty much the weekend done. Tomorrow I will just be driving around in whatever position. I will try to get into the top 10, but it will be a nice Sunday drive I imagine.”

History may encourage Hamilton, but it is unlikely.

Frenchman Olivier Panis’s 1996 victory from 14th on the grid for Ligier came in a madcap race run in a deluge and not under the blue skies forecast here for Sunday.

Bottas, who will carry Mercedes hopes of preventing a Ferrari triumph, added: “It was a really good lap for me. This is one of the most mentally-demanding circuits and am glad I felt support from the fans and appreciated it.

“It has been a tricky weekend for us. We lost some valuable practice on Thursday, in FP2, and it was difficult to get a lap time -- and Lewis had problems with traffic.”

Briton Jenson Button, back from retirement to replace Fernando Alonso who is racing in the Indianapolis 500, was ninth for McLaren ahead of his team-mate Stoffel Vandoorne.

Button has a 15-place grid penalty for engine replacements and that is expected to lift Hamilton up to 13th.

"My one and only qualifying session this year and I’m ninth – but I start 20th!”

Hamilton failed to make it out of Q2 when he was deprived of a late clean lap in the dying seconds.

Hamilton’s hopes were ruined when Belgian Stoffel Vandoorne went into the barriers at the Swimming Pool exit, yellow flags flying.

“That’s me out, right?” said Hamilton, deprived of a clean lap and condemned to qualify 14th, one of five men eliminated.

"Yes, toasted," came the reply as he pulled in to the pits, his chest heaving and hands waving with frustration.