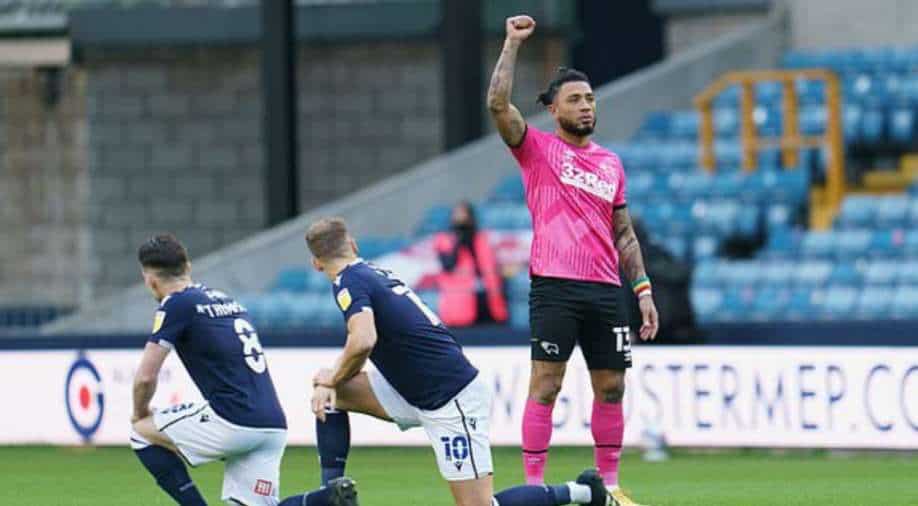 The footballing world was left shocked to see Millwall supporters boo players taking a knee before their match to Derby County on Saturday. However, Millwall’s official fan club has said that boos were not motivated by racism.

The footballing world was left shocked to see Millwall supporters boo players taking a knee before their match to Derby County on Saturday. However, Millwall’s official fan club has said that boos were not motivated by racism.

Millwall fans were heavily slammed by the Football Association (FA), Kick it Out – a campaign to free the English game of racism – and many others including former players, pundits and fans at Saturday’s Championship match.

Millwall said they were “dismayed and saddened” by the boos of the fans while adding that the players would continue to take a knee before the matches in a bid “to support the drive for change, not just in football but in society generally”.

Millwall Supporters’ Club, in a statement on Sunday, said the boos were aimed at the ‘Black Lives Matter’ (BLM) organisation, which it said held “extreme political views”.

"We fervently believe that the motives of those behind the booing were not racist," the Supporters' club said in a statement here.

“However, at a time of heightened awareness and with the country watching, the choice of those individuals was always going to damage their club and be perceived by the media as racist.

“Anyone who believes it was a racist act should read the views of those who booed and see they were doing it in reaction to the war memorials and statues of (Winston) Churchill defaced by the BLM organisation and the extreme political views they hold and for which ‘taking the knee’ is associated with.”

Players in England, including the ones participating in the Premier League, have been taking a knee before matches since June in support of the Black Lives Matter Movement which spread worldwide following the death of George Floyd under police custody in Minneapolis in May.

The Premier League and Football League have since tied the kneeling gesture to their anti-racism campaigns, including ‘No Room for Racism’.

“These same fans have never booed the Kick It Out campaigns on our pitch or the huge work of the Millwall Community Trust and its many anti-racism campaigns,” added the supporters’ club.

However, it backed calls for steps to deal with racism and said “the action needed was not to boo the gesture.”

Not just that, fans also booed the kneeling gesture at Colchester United’s League Two (fourth-tier) match at home to Grimsby Town on Saturday with the club’s owner and chairman Robbie Cowling saying that fans opposing the anti-racism movement were not welcome at matches.

"Maybe those that booed on Saturday might now understand what this gesture means to our club and will at the very least remain silent during future games whilst the players continue to take the knee before each kick-off," he wrote in a statement here on the club's website.

“Alternatively, they should just stay away from our club because anyone that still wants to boo now that I have explained the purpose and importance of the taking of the knee is not welcome at our club.”