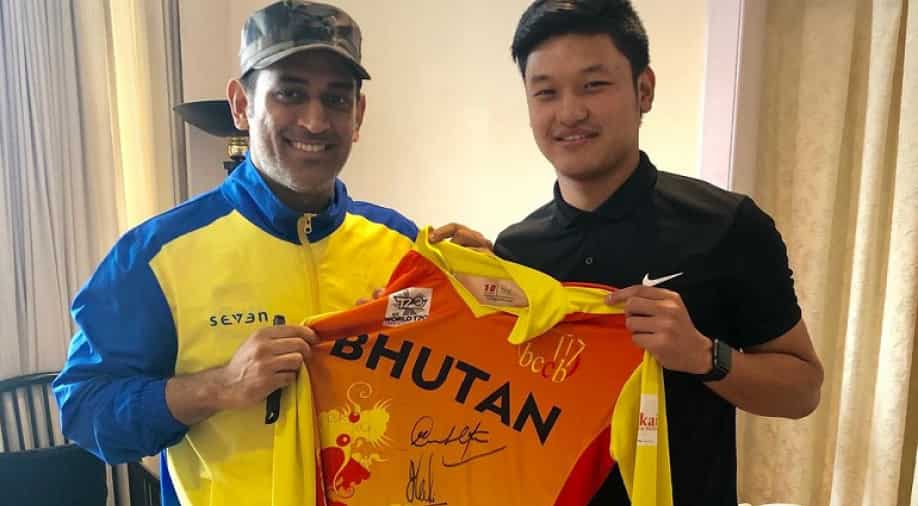 Mikyo Droji is the first Bhutanese player to register for the IPL auction. Photograph:( Instagram )

Mikyo Dorji is the first Bhutanese player to have registered for the Indian Premier League (IPL) auction. He recently shared a piece of advice that he had received from the legendary MS Dhoni.

The Indian Premier League (IPL) is the biggest T20 cricket league in the world and has grown in leaps and bounds since its inception in 2008. IPL is currently heading into its 15th season and has provided a platform to cricketers around the globe to showcase their skills and talent against the best in the business.

The league has transcended boundaries and allowed players from countries like Afghanistan, Nepal and others to make a name for themselves in the league. With the introduction of two new teams from the upcoming 2022 edition of the league, IPL is set to see more participation from associate nations this time around.

Ahead of the IPL 2022 mega auction next month, Dorjee, a fast-bowling all-rounder shared a picture and a video of his meeting with the legendary MS Dhoni, and revealed a piece of advice from the Chennai Super Kings (CSK) captain. Dhoni is one of the most successful captains in IPL history with four titles under his belt.

Dorji had met Dhoni during his time with the MRF Pace Foundation in Chennai. “'Keep it simple. Focus more on the process and less on the results. If you get the process right you will get the result. And enjoy, don’t take too much pressure'. Ever since the great MS Dhoni gave me this piece of advice, it has always stuck with me," Dorji wrote in his post, sharing a picture with Dhoni.

22-year-old Dorji has so far played only one T20I in his international career. He made his international debut for Bhutan in a T20I against Nepal in December 2019. He scored 27 runs in the game. Dorji said registering for the IPL auction is a big deal for Bhutan.

However, the youngster is aware that his name might not be on the final shortlist once the initial list of 1214 players is trimmed down as per the choice of the owners. Nonetheless, he is happy to have registered for the auction and dreams of playing in the IPL one day.

“Playing in the IPL is an ultimate dream for me. People saw that there was one player in the auction list from Bhutan and my friends started calling me. But they don’t know (laughs) that this is just the initial round, and the names are going to be shortlisted further. If I am honest to myself, my name will not be there in the main list after it is trimmed. Anyways, just registering is a big deal for Bhutan,” Dorji told the New Indian Express.