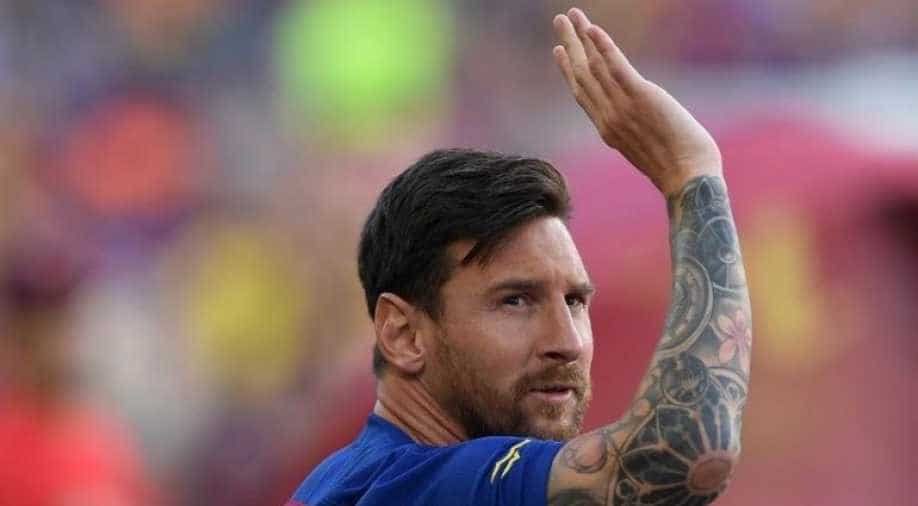 The bombshell is a massive blow for an already beleaguered club - and Messi's transfer request has put some of Europe's most high-profile teams on high alert.

One of the longest-running player and club associations in modern football is about to come to an end. After months of simmering tensions with Barcelona's hierarchy, Lionel Messi has told the Spanish giants that he wants to leave immediately and for free.

In pics: Stay or go? Messi in legal tangle with Barcelona over leaving club

The bombshell is a massive blow for an already beleaguered club - and Messi's transfer request has put some of Europe's most high-profile teams on high alert.

But apparently no more, late on Tuesday night, the 33-year-old argentine dropped a bombshell on the already beleaguered Spanish giants. Telling them that he was done with the club that he had joined as a kid 20 years ago.

On August 18, Josep Maria Bartomeu, Barcelona president said: "I think Messi has created an era at barcelona. The Messi era evidently started many years ago, and within this Messi era there are different cycles. I agree a cycle has come to an end and a new one is about to start. But all are part of the Messi era."

In pics: What's next for Lionel Messi? A record breaking career in pictures

Only a week ago, Barcelona president had proclaimed in public that Messi would end his career at the club. But in reality, the six-time world player of the year had put contract negotiations on hold in December itself - having grown increasingly frustrated with the club's dealings both on and off the pitch.

He publically took on the club's former sporting director Eric Abidal for suggesting the players were to blame for the sacking of manager Ernesto Valverde in December.

The failed big-money transfers of the likes of Ousmane Dembele, Philippe Coutinho and Antoine Griezmann were also a sticky point...

While Messi's assertion that the squad was not good enough to win the champions league was proved right with the humiliating 8-2 defeat to Bayern Munich in the Champions League.

Barcelona sacked Setien and appointed a club legend in Ronald Koeman to begin a rebuild. But the club's public position that the likes of Luis Suarez, Gerard Pique, Sergio Busquets and Jordi Alba could be moved on appear to have convinced Messi that it is time to go.

What has caught the club off-guard however is Messi asking for a free transfer. The Argentine has triggered a clause in his contract that allowed him to do so this year, but one that Barcelona believed had expired in June.

But Messi's legal team has a different view - and there is every likelihood that the matter could end in a protracted court challenge.

This despite Messi receiving the backing of many of the club's past and present players.

There is certainly no shortage of suitors for one of the greatest to have ever played the game - despite his astronomical wages.

Messi's statistics at Barcelona are nothing short of extra-ordinary - 731 games, 634 goals, 285 assists, 48 hat-tricks and a host of individual honours.

His career has coincided with the most successful era in the club's history - 34 major trophies over 16 years that includes 10 Spanish La Liga titles, 4 UEFA Champions Leagues and several other cup triumphs.

Manchester City could lure Messi to the Premier League - with a world-class squad and their former Barcelona manager Pep Guardiola.

The finances also appear to be no bar for PSG, where Messi could be tempted by a Neymar reunion and a chance to play in a front three also featuring Mbappe.

While Antonio Conte's Inter Milan have reportedly been cosying up to Messi for a year for exactly this sort of eventuality.

But where he ends up at any of these clubs, or even somewhere else - only time will tell. One thing appears certain - the Messi-Barcelona love affair is over.