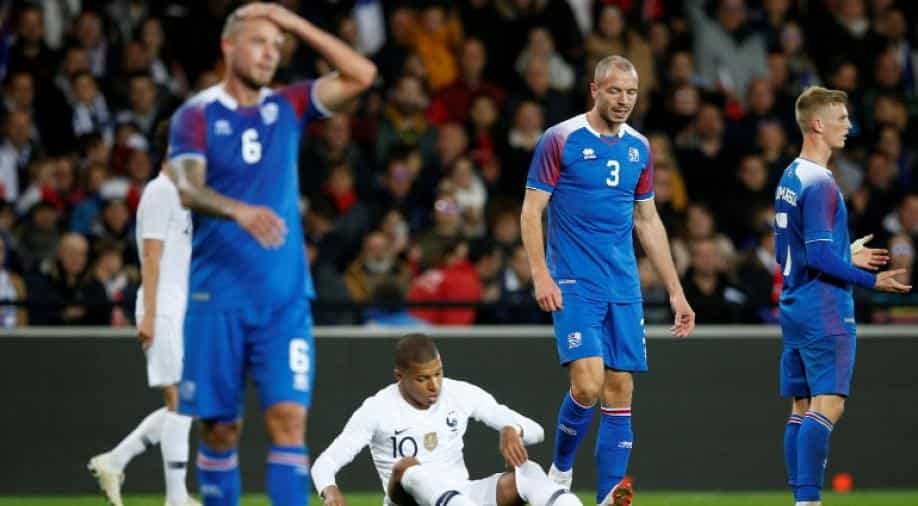 The Iceland players threw themselves frantically at every ball in a concerted effort to keep their clean sheet, but they were undone in the 86th minute.

France substitute Kylian Mbappe engineered two late goals to rescue a 2-2 draw against Iceland and spare the blushes of the world champions in their friendly in Guingamp on Thursday.

The home side enjoyed the lion's share of possession and created plenty of good scoring opportunities, but Iceland, hammered 6-0 and 3-0 in their last two games by Switzerland and Belgium, still managed to take the lead on the half-hour mark.

Alfred Finnbogason dispossessed defender Presnel Kimpembe near the corner flag before jinking inside Lucas Digne and squaring the ball to the onrushing Birkir Bjarnason, who side-footed it home from the edge of the area.

It was Iceland's first goal under new coach Erik Hamren and Kari Arnason added their second 13 minutes into the second half, flicking a near-post corner past France keeper Hugo Lloris and into the net.

That prompted the introduction of Mbappe, who scored France's fourth goal in their 4-2 World Cup final win over Croatia.

The Iceland players threw themselves frantically at every ball in a concerted effort to keep their clean sheet, but they were undone in the 86th minute.

After having a goal ruled out for offside, the 19-year-old Mbappe hammered a shot that goalkeeper Hannes Halldorsson deflected into Holmar Orn Eyjolfsson, who sent it bouncing across the line for an own goal.

Mbappe levelled the scores four minutes later, stepping up to rifle the ball home from the penalty spot after a handball by Kolbeinn Sigthorsson.

France host Germany at the Stade de France on Tuesday in their third UEFA Nations League A, Group 1 match, having picked up four points from their opening two games.