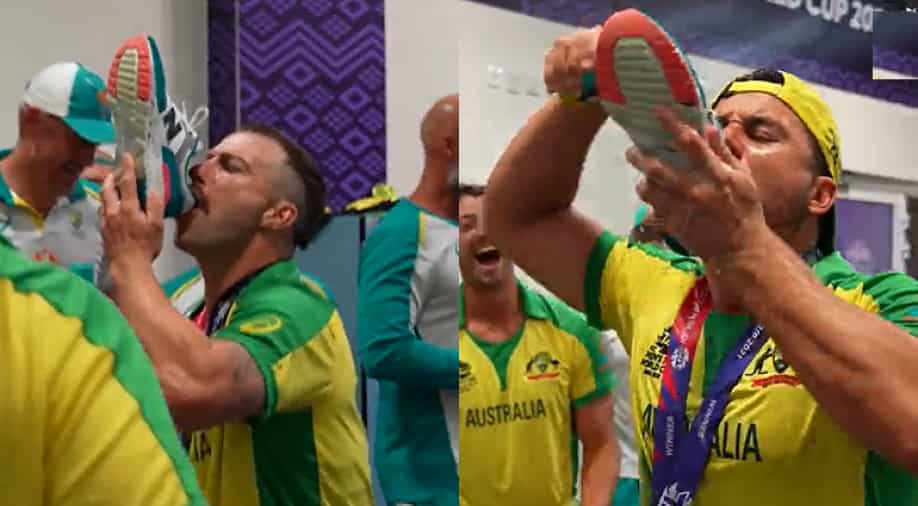 Australian players were seen drinking from a shoe as they celebrated their memorable T20 World Cup triumph in the dressing room after beating New Zealand in the final in Dubai on Sunday.

The Aussies celebrated wildly in the dressing room after a memorable campaign in the World Cup. Wicket-keeper batter Wade was seen removing his shoe during the celebrations in the dressing room and pouring down a drink in it before chugging it down as his teammates cheered him on in a video shared by the ICC on social media.

Stoinis joins him as he took gulps down a drink from Wade's shoe to celebrate Australia's win. The 'shoey' celebration was introduced to the world by Aussie Formula One star Daniel Ricciardo, who had celebrated his victory in the German Grand Prix in 2016 by drinking champagne from his shoe.

The likes of Lewis Hamilton have also pulled off similar celebrations in the past and on Sunday, it was Wade and Stoinis who continued the trend of drinking from a shoe post Australia's T20 World Cup win.

It was a dominant performance from Australia in the final as they won the toss and chose to bowl first in Dubai. The Aussies did well to restrict New Zealand on 172/4 in 20 overs and chased down the target with seven balls to spare.

David Warner continued his purple patch in the tournament with a sublime fifty as he notched up 53 off 38 balls while Micthell Marsh played a stunning knock of unbeaten 77 off 50 balls. The duo added 92 runs for the second wicket and set up a comfortable win for Australia.