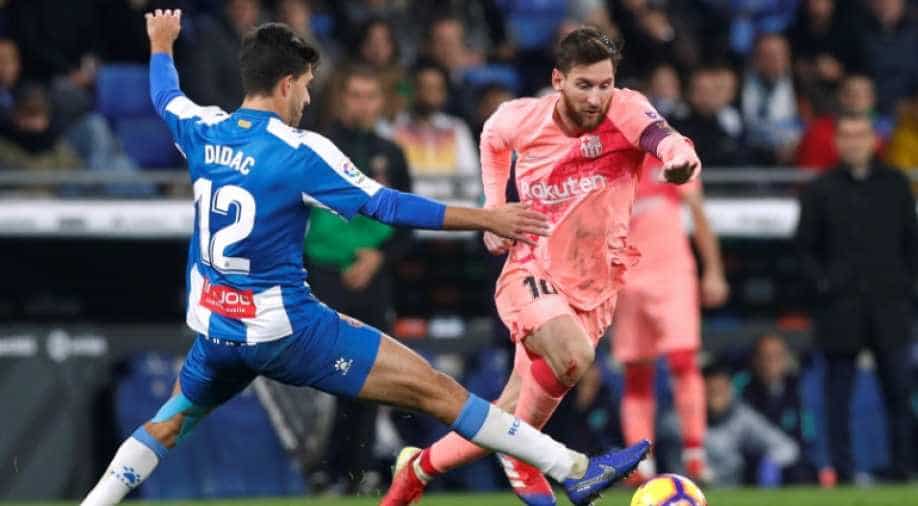 Messi tormented Espanyol's defence and created several openings for his teammates, with Suarez hitting the post from one delightful lobbed pass.

The champions, who started the game level with Sevilla and Atletico Madrid on 28 points, swept to victory in Cornella as Messi put on a sublime show in the week he was ranked the fifth best player in the world at Monday's Ballon d'Or awards.

The Argentine whipped a free kick into the top right corner in the 17th minute before brilliantly setting up Ousmane Dembele to double Barcelona's lead.

Luis Suarez added the third just before halftime with a shot from a tight angle that deflected in off goalkeeper Diego Lopez.

Messi completed the rout with another special free kick in the 65th minute and VAR ruled out a consolation from Oscar Duarte for offside at the other end.

Espanyol's fourth consecutive league defeat left them ninth in the standings, but they didn't stand a chance with Messi in this mood.

"We know what Leo is like, he doesn't need to demonstrate anything to us, we don't agree with the Ballon d'Or rankings," Barca midfielder Ivan Rakitic said.

"We had a great game, a derby is always difficult and we deserved the four goals."

Messi tormented Espanyol's defence and created several openings for his teammates, with Suarez hitting the post from one delightful lobbed pass.

Dembele also impressed, starting on the left ahead of Philippe Coutinho as a reward for his recent improvement in form.

Along with Suarez, who caused havoc with his work-rate and grit, the trio were simply too hot for Espanyol to handle.