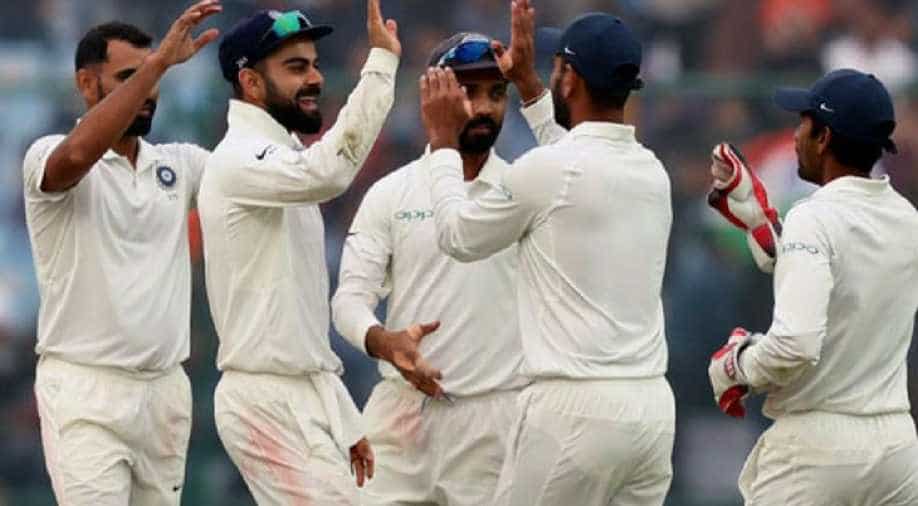 Virat Kohli's India will leave for a gruelling tour of South Africa on Wednesday. Photograph:( AFP )

Virat Kohli's India head for a gruelling tour of South Africa on Wednesday looking for a record-breaking tenth straight Test series triumph, but they will have to overcome a reputation for being bad travellers.

India, who beat New Zealand, England and Australia in a powerful home season to consolidate their number one Test ranking, celebrated their last major away victory in 2008-2009 when they beat the Kiwis 1-0 in a three-Test series.

"Looking forward to the South Africa tour, it's going to be a different challenge," said Rohit Sharma, who captained the Indian limited-overs side in Kohli's recent absence.

"But I want to reiterate about our home season, it's never easy to beat anyone. We were challenged at different times and we came back."

Overseas success against weakened West Indies and Sri Lanka sides in the past two years, and India's invincibility at home, has led pundits to back Kohli's side to put up a strong challenge to South Africa, who are second in the Test rankings and have never lost to India at home.

India will play three Tests, six one-day internationals and three Twenty20 matches during the two-month tour. The series begins with the first Test in Cape Town on January 5.

"They had a very good 2017. They have to carry on with the good work overseas also, away from Asia. At any given time you cannot sit on your past laurels," former captain Bishan Singh Bedi told AFP.

"To prove it to yourself, not to the world, that you are worthy of the number one position. It's not easy to get there but even more difficult to stay there," the ex-spinner added.

Apart from hosts Australia losing to South Africa 2-1 in 2016-2017, and visiting England beating the Proteas in 2015-2016, the top Test-playing nations have enjoyed hegemony on home turf.

The Indians once labelled "tigers at home and lambs abroad" in Test cricket, have a chance of breaking new ground in South Africa's den.

"Most teams are doing well at home and struggling overseas. So this is an opportunity for India to move away from the pack," veteran sports journalist Ayaz Memon told AFP.

"South Africa lost badly to India when they came here in 2015. India may have won the odd Test but they have never won a series in South Africa and Australia," he added.

India are pinning their hopes on the pace quartet of Mohammed Shami, Umesh Yadav, Ishant Sharma and Bhuvneshwar Kumar to make an impact on fast-paced South African tracks.

The fast bowlers played a significant role during India's 1-0 win over Sri Lanka as they equalled Australia's record of nine Test series victories between 2005-2008.

But the 71-year-old Bedi said the Indian team "shouldn't get carried away" after recent praise of its pacemen.

"Very happy situation that Indians, given an opportunity, now will be able to retaliate with their pace department," he said.

But "good bowling, whether it's fast or spin, is getting the opposition out twice", he warned.

"Not so much of verbal bouncers or any sort of intimidation and even if you do it, first do your job of getting wickets," said Bedi, who is known for his forthright views.

On the batting front, vice-captain Ajinkya Rahane's form also seems to be of concern for a team whose batting is led by the prolific Kohli.

Rahane, who averaged over 65 in India's last South Africa tour in 2013-2014 when they lost the two-match series 1-0, has managed just 17 runs in his last five innings.

Coach Ravi Shastri said it was just a matter of time before the top-order batsman gets his act together.

"It's not that they are shattered mentally. It's just about spending some time at the crease, get your feet moving the way it should be and you will be on your way," Shastri told CNN News18 TV Channel.

"I think it will be Indian batting versus the South African batting. Both teams have good bowling attacks. I think our bowlers will do a very good job but it's how our batsmen stand up," he said.