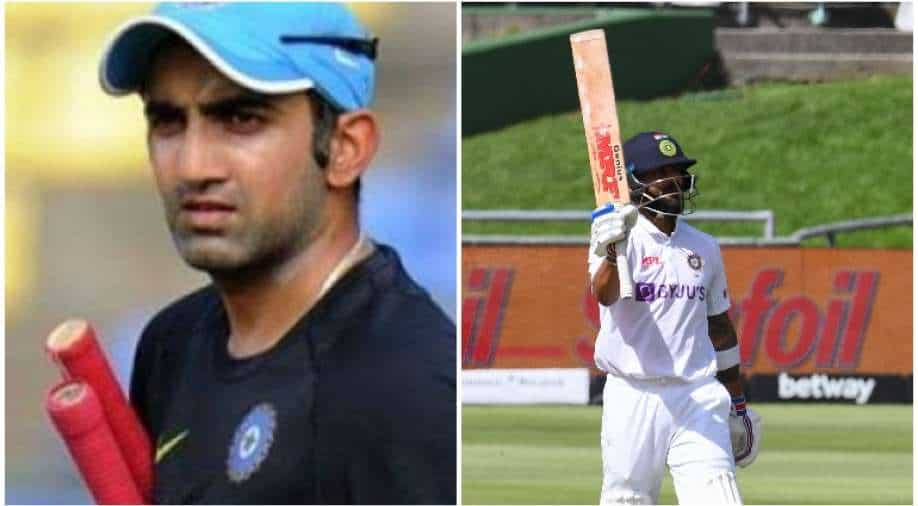 Gambhir lauds Kohli for his gritty 79 on Day 1 of 3rd Test Photograph:( AFP )

Virat Kohli scored a gritty 79 on Day 1 of the Cape Town Test on Tuesday (January 11). Gautam Gambhir has lavished praise on the 33-year-old for his flawless knock.

Indian captain Virat Kohli produced a masterclass with the bat on Day 1 of the third and final Test between India and South Africa at Newlands, Cape Town on Tuesday (January 11). After the visitors won the toss and elected to bat first, the Indian openers KL Rahul and Mayank Agarwal got dismissed for cheap. The onus fell on Cheteshwar Pujara and Kohli before the former's dismissal saw the Test captain take full responsibility to take charge of the Indian innings.

Kohli scored his second slowest half-century in the red-ball format by leaving plenty of balls outside-off stump line whereas scored on the leg side. Though he was beaten on a number of occasions, the 33-year-old didn't get bogged down as seemed to have kept his ego aside, of going for the outside-off deliveries, to return with a gritty 79. Thus, former Indian opener-turned-commentator Gautam Gambhir lavished huge praise on Kohli for his batting performance.

"Virat has said many times that when you go to England, you should leave behind your ego in India. Today, Virat Kohli left behind his ego in the kit bag and this knock reminds me of his very successful tour of England, where he got beaten many times but left a lot of deliveries outside off-stump.

"Today, in the same way, he left deliveries outside off-stump, he got beaten as well but kept his ego with himself. He did not try to dominate the bowlers on every delivery," Gambhir said on Star Sports.

The former cricketer further asserted, "When you play in these conditions and against such bowlers on the first day, where there is help for the bowlers, you play in your shell at times although the South African bowlers did give him that opportunity." Along with that, his scoring areas might have been through the covers but he scored a lot of runs on his legs, which he has always done. So we saw a glimpse of the knocks he played in England."

Nonetheless, India were folded for a below-par 223 on Day 1 of the series finale in Cape Town despite Captain Kohli's 79. The likes of Rahul, Mayank, Ajinkya Rahane, Rishabh Pant struggled whereas Pujara missed his half-century by 4 runs.

At stumps, SA are 13-1 with skipper Dean Elgar removed by Jasprit Bumrah. The visitors will, however, have to bowl very well to take a vital first-innings lead or, at least, not allow the Proteas to take a sizeable one.