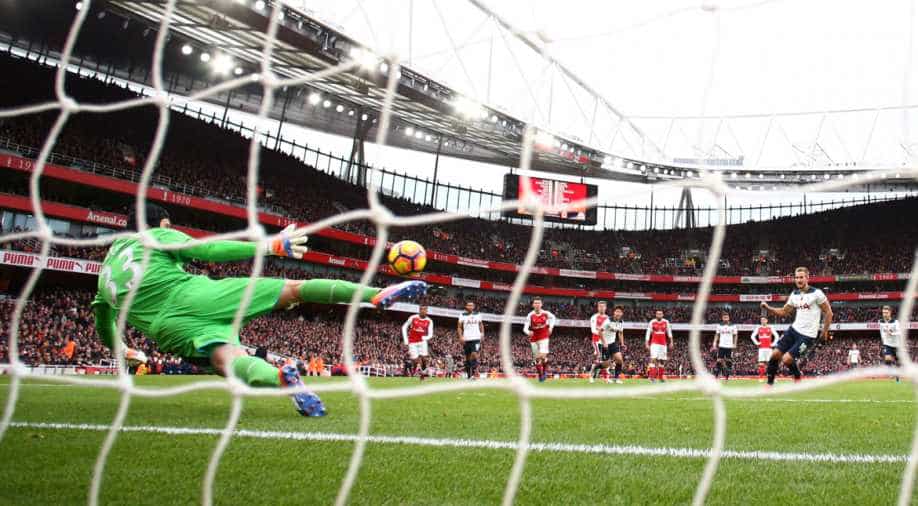 Harry Kane of Tottenham Hotspur scores his sides first goal from the penalty spot during the Premier League match between Arsenal and Tottenham Hotspur at Emirates Stadium on November 6, 2016 in London, England. Photograph:( Getty )

Harry Kane made a goal-scoring return from injury to earn Tottenham Hotspur a 1-1 draw in an absorbing north London derby and foil Arsenal's attempts to move top of the Premier League at the Emirates on Sunday.

Requiring a first league win over Tottenham in five attempts to climb above pre-match leaders Chelsea, Arsenal were given a helping hand in the midday kickoff by Kevin Wimmer's own goal just before halftime.

But Kane, out since mid-September with an ankle injury, levelled six minutes after the break from the penalty spot. Kane wasted two other glorious chances while both sides hit the woodwork in an intense derby.

Theo Walcott thundered a shot against the crossbar in the first half while Tottenham, who finished stronger, nearly won it late on when Christian Eriksen's curling free kick into the area evaded everyone and bounced off the post.

Instead of heading into the international break top, Arsenal dropped to fourth with 24 points from 11 games, one behind Chelsea and two behind Liverpool, who surged past everyone with a 6-1 thrashing of Watford later.

Tottenham are unbeaten in the Premier League but have drawn their last four games and stay fifth with 21 points.

"I'm very pleased with the performance," Tottenham manager Mauricio Pochettino, whose side improved greatly from the midweek Champions League loss to Bayer Leverkusen, said. "They created some chances and we created chances, maybe the draw was a fair result. The second half we started very well and it was a very open game. It's been a tough month so to be 11 matches unbeaten is very positive for us."

Arsenal manager Arsene Wenger said his side had been "flat" in the second half, but thought Tottenham's penalty was harsh. "From where I sit it didn't look dangerous to score or a deliberate foul," he said. "(Victor) Wanyama was lucky to stay on the pitch, after three or four fouls, an elbow on Walcott."

The visitors, who were without midfielder Dele Alli after he injured a knee in training, made the better start. Kane headed Eriksen's cross wide from in front of goal as Arsenal initially seemed wrong-footed by Tottenham's formation which featured three centre backs in Wimmer, Eric Dier and Jan Vertonghen with full backs Kyle Walker and Danny Rose attacking at every opportunity.

Arsenal began to assert themselves though and Alex Iwobi should have scored after a lightning counter-attack but shot tamely straight at Hugo Lloris.

Walcott let fly from 25 yards, but saw his shot cannon off the bar back to Ozil who sliced the rebound over.

Wimmer, playing his first league match of the season, then had a nightmare moment, glancing Ozil's teasing 42nd minute free kick into his own goal under pressure from Laurent Koscielny.

Kane gave Tottenham's attack a threat and he made no mistake from the spot after referee Mark Clattenburg ruled that Koscielny had ended Mousa Dembele's driving run illegally.

He has now scored five goals in four north London derbies, and it should have been six when he failed to make proper contact with Danny Rose's low cross.

Eriksen forced a great save by Cech and while Arsenal pressed for a winner, Spurs finished strongly with substitute Vincent Jansen wasting a late chance to grab victory.