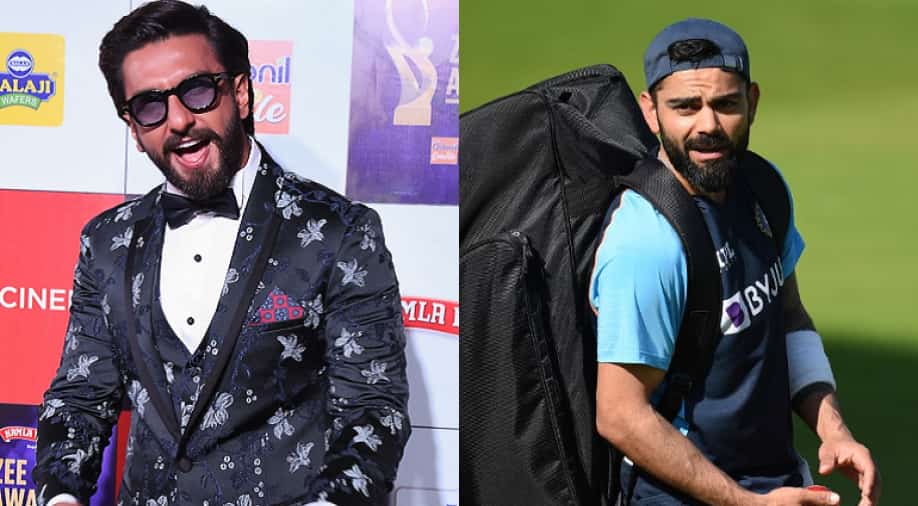 Bollywood actor Ranveer Singh reacted to Indian cricket team captain Virat Kohli's post ahead of the T20 World Cup 2021 clash against Pakistan and fired him up for the game.

Bollywood actor Ranveer Singh has fired up Indian captain Virat Kohli ahead of the team's clash against Pakistan in the T20 World Cup 2021 on Sunday (October 24). The mother of all clashes will be staged at the Dubai International Stadium in Dubai with India aiming to extend their winning streak against the Men in Green in World Cups.

Ahead of the much-awaited clash, Indian captain Kohli took to Instagram to share a picture of himself in India's T20 World Cup 2021 jersey. Kohli can be seen pointing at India's badge on the shirt. Reacting to Kohli's Instagram post, Ranveer wrote - "Come on, boy! It’s OURS this time! let’s gooooooooo."

Also Read: Treat it as a game, not war: Mohammad Kaif offers 'small advice' ahead of India-Pakistan clash

India are heading into the Pakistan clash with back-to-back wins in their last two warm-up matches against England and Australia respectively. The likes of KL Rahul, Rohit Sharma and captain Kohli among others looked in fine form during the warm-up games and will be hoping to make the difference against Pakistan on Sunday.

Pakistan, on the other hand, won their first warm-up match against West Indies before losing their second practice game against South Africa. The Men in Green are unbeaten in their last six matches in Dubai and will pose a tricky challenge for Kohli & Co. in Sunday's clash.