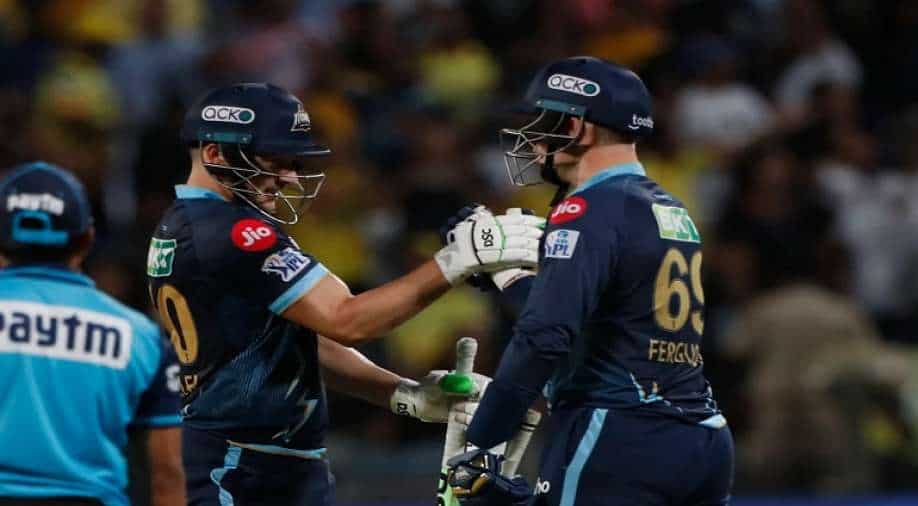 Leading the side in the absence of an injured Hardik Pandya, Rashid Khan supported Miller with a 21-ball 40 as GT recovered from 16 for three, and then 48 for four, to seal one the greatest comebacks in the history of the league.

The big-hitting David Miller blazed away to a 51-ball 94 as Gujarat Titans pulled off an incredible come-from-behind three-wicket win over Chennai Super Kings in the IPL here on Sunday.

Leading the side in the absence of an injured Hardik Pandya, Rashid Khan supported Miller with a 21-ball 40 as GT recovered from 16 for three, and then 48 for four, to seal one the greatest comebacks in the history of the league.

GT were set a target of 170. Needing 48 in 18 balls after an excellent 17th over by Dwayne Bravo, Rashid, inspired by Miller's monster sixes, hit Chris Jordan for three of his own maximums.

GT collected 25 runs from the over to reduce the equation to a gettable 23 from 12 balls.

More drama awaited the seesawing battle as Bravo dismissed Rashid and Alzarri Joseph off successive balls in the penultimate over.

Strangely enough, CSK skipper Ravindra Jadeja handed the ball to the battered Jordan for the final over, hoping that his experience and ability to wide yorkers would do the job for the yellow brigade. However, Miller had other ideas as he completed the job with a ball to spare.

In all, Miller smashed eight boundaries and six sixes, while Rashid had three maximums and two fours to his name during a match-turning partnership of 70 runs.

Earlier, Ruturaj Gaikwad finally found form with a 48-ball 73 before Gujarat Titans pulled things back to stop Chennai Super Kings at 169 for five. Gujarat Titans lost early wickets in their chase of 170, reeling at 16 for three in the fourth over.

Shubman Gill, who has played a few influential knocks this season, was out for a golden duck in the first over before the out-of-sorts Vijay Shankar too joined the former in the dugout.

Bowling with an action that is far from conventional, off-spinner Maheesh Theekshana sent back Abhinav Manohar (12) after accounting Shankar. Wriddhiman Saha's (11 off 18 balls) painstaking stay in the middle was brought to an end by CSK skipper Ravindra Jadeja as GT slipped to 48 for four in the eighth over.

But then, Miller and Rashid joined forces to seal the game in favour of their team. This was after the Titans bowlers did exceedingly well in the last six overs, conceding only 45 after a 92-run third-wicket stand between Gaikwad and Ambati Rayudu (46 in 31 balls).

Invited to bat, Gaikwad, who notched up his maiden IPL fifty of the season, added 92 off just 56 balls with Rayadu, rallying after CSK were in a spot of bother at 32 for two in the sixth over.

Gaikwad's knock was studded with five fours and as many sixes as he anchored the innings.

Rayadu hammered four boundaries and two sixes, playing second fiddle to Gaikwad, who was in his elements. After a sedate start, Gaikwad, in search of vital runs after a prolonged run of poor scores, upped the ante in the fourth over.

The 'local boy' flicked Yash Dayal (1/40) for his first maximum over the deep backward square region and then got a boundary off a top-edge. Gaikwad flicked pacer Mohammed Shami (1/20) for a boundary and then launched into Alzarri Joseph (2/34), smashing him for another maximum over mid-wicket. The elegant right-handed batter mixed caution with aggression and played a stylish pull shot over deep square-leg for a maximum off Joseph, who gave away 15 runs in the 11th over.

Gaikwad completed his fifty with a cheeky single.

In the company of Rayudu, he launched into Dayal and hit him for two boundaries and a six in the 12th over, from which 19 runs came.

Gaikwad then tore into Lockie Ferguson (0/46), pulling him for a six before playing an elegant cover drive to set it for CSK, who were 113 for two at that stage of the innings with seven overs still to go.

However, after threatening to score above 180-185, CSK lost the plot after losing Rayadu and Gaikwad in quick succession, slipping to 131 for four. While Rayadu gave a sitter to Vijay Shankar at sweeper-cover, in a bid to score quickly, Gaikwad perished in the 17th over.

A late onslaught by skipper Ravindra Jadeja (22 not out off 12 balls) and Shivam Dube (19) helped CSK close in on 170, with 18 runs coming in the final over bowled by Ferguson.