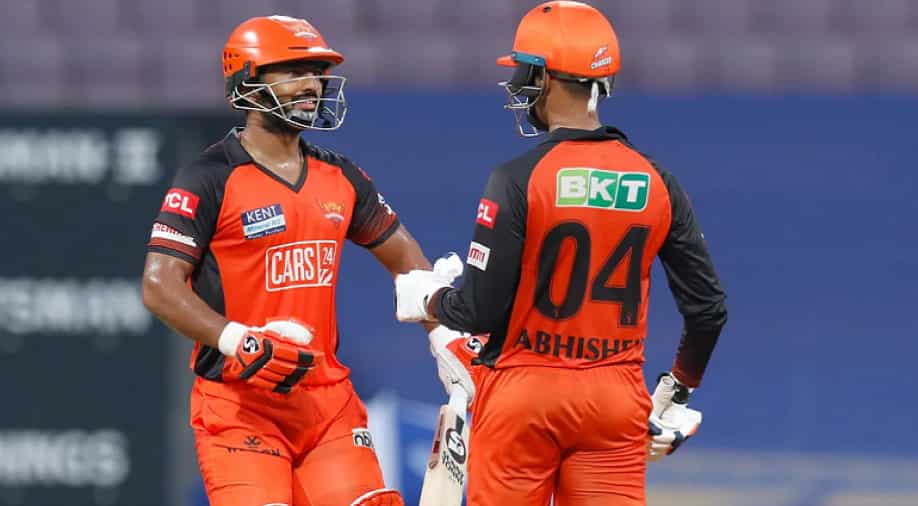 Abhishek Sharma and Rahul Tripathi took the CSK bowling attack to the cleaners as Sunrisers Hyderabad thrashed Ravindra Jadeja & Co. by 8 wickets to bag their first win of the ongoing IPL 2022.

Sunrisers Hyderabad (SRH) hammered Chennai Super Kings (CSK) by eight wickets at the DY Patil Stadium in Mumbai on Saturday (April 09) to bag their first win in the ongoing Indian Premier League (IPL) 2022. Abhishek Sharma and Rahul Tripathi starred with the bat as SRH chased down the target of 155 runs with 14 balls to spare to secure their first three points of the season.

Both CSK and SRH headed into the clash winless in IPL 2022. While CSK had lost their first three games in a row under new skipper Ravindra Jadeja, SRH had suffered defeats in their first two matches. Put to bat first, CSK openers disappointed once again as both Ruturaj Gaikwad (16) and Robin Uthappa (15) were dismissed cheaply in the Powerplay.

Moeen Ali played a great knock of 48 runs and combined with Ambati Rayudu (27) to post a 62-run stand for the third wicket before CSK lost wickets in quick succession and failed to finish strongly. It was skipper Jadeja, who helped the side post a fighting total of 154 runs on the board with a quickfire 23 off 15 balls.

Washington Sundar, who got rid of Uthappa on the very first ball he bowed in the game, was the pick of the bowlers for SRH as he finished with excellent figures of 2/21 in his 4 overs. Left-arm pacer T Natrajan, who bamboozled Gaikwad with a stunning in-swinging yorker also impressed as he finished with 2/30 off his four overs.

Sharma, who had been raring to prove his credentials after being promoted to open the innings by SRH, finally found his mojo against CSK on Saturday as he went berserk right from the start of his innings. The left-hand opener slammed a brilliant knock of 75 runs off 50 balls laced with five fours and three sixes to get his team off to a flyer along with skipper Kane Williamson, who played the anchor's role with his 32 off 40 balls.

Sharma and Williamson added a partnership of 89 runs for the first wicket before Rahul Tripathi arrived in the middle and took the CSK bowlers to the cleaners Sharma and Tripathi combined to add 56 runs for the second wicket to set up a comfortable win for the Orange Army. Sharma's fiery knock was his maiden fifty in IPL 2022 as he cemented his spot as an opener in the side.

CSK lose four in a row!