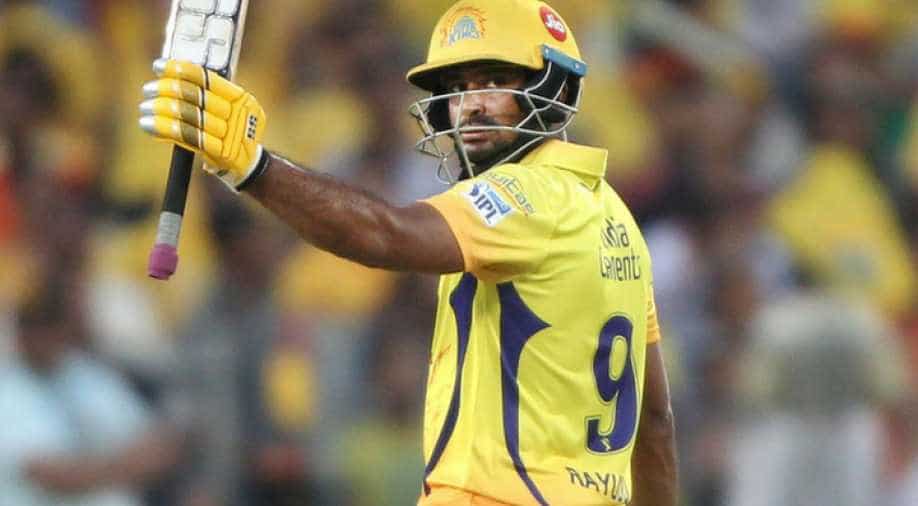 Ambati Rayudu celebrates his 50 runs against Hyderabad. Photograph:(PTI)
Follow Us

Ambati Rayudu slammed a century off 62 balls and helped his team in achieving the 180-run target against Hyderabad at Maharashtra Cricket Association Stadium, Pune on Sunday.

It was a clash between the 'best chasers' (Chennai) and 'best defenders' (Hyderabad) but team Chennai displayed an outstanding performance and chased down the target at home ground.

The openers, Shane Watson and Ambati Rayudu scored 57 and 100 runs respectively to give the necessary start to the team and defeated Hyderabad by eight wickets.

Chennai's batsmen Ambati Rayudu was given Man of the Match award for his magnificent performance.

Apart from the openers, MS Dhoni scored 20 runs to mark the much-needed victory, on the other hand, Suresh Raina lost his wicket after scoring just two runs.

Known for their massive bowling strength, Hyderabad struggled in taking wickets and none of the bowlers performed.

Sandeep Sharma took one wicket of Suresh Raina in his 4-over spell.

Earlier, MS Dhoni had invited the guests to bat first after winning the toss.

Another opener Alex Hales did not perform and lost his wicket to Deepak Chahar after scoring just two runs off nine balls.

Skipper Kane Williamson slammed his 10th IPL fifty and found a determined ally in Shikhar Dhawan on the other end to put up a decent target for the opponents.

In search of wickets, MS Dhoni took help of seven bowlers but apart from Deepak Chahar, none of the bowlers were economical. Chahar took one key wicket of Alex Hales and gave 16 runs in his 4-over spell.

'I'm not sure...': Djokovic on his injury return to tennis after Australian Open victory

'That hurts me...': Djokovic on his father not present at the Australian Open final