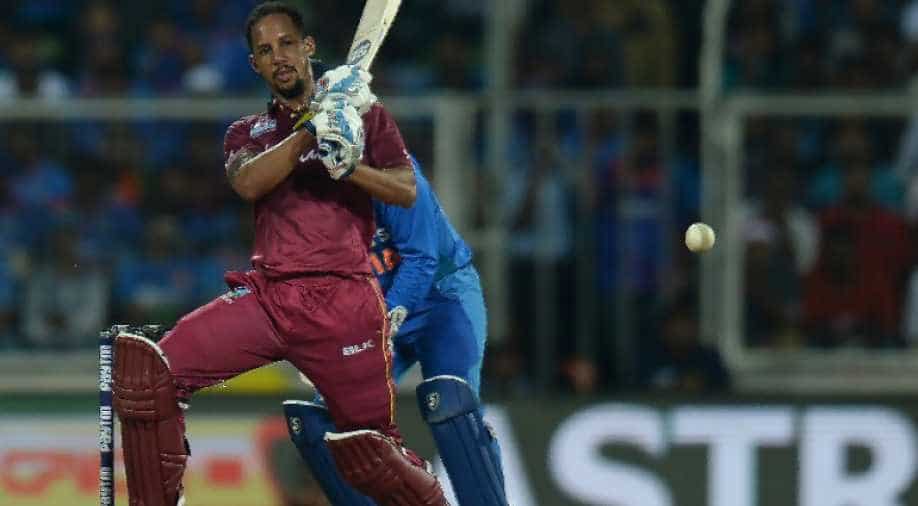 Lendl Simmons, playing a shot during the second T20 between India and West Indies Photograph:( AFP )

Chasing a stiff target of 171, West Indies remained flawless throughout the second innings and won with eight wickets in hand.

Chasing a stiff target of 171, West Indies remained flawless throughout the second innings. Simmons and Evin Lewis opening partnership of 73 runs laid a solid foundation as the visitors won the match with nine balls to spare and eight wickets in hand. Simmons remained not out as Nicholas Pooran (38) struck a boundary against the bowling of Deepak Chahar to finish off the proceedings.

Washington Sundar was the only Indian bowler who restricted West Indies' scoring rate and ended up with one wicket by giving only 26 runs in his four overs. Ravindra jadeja also claimed one wicket but was smacked for 22 runs in his two overs.

Simmons was awarded Player of the Match trophy for his unbeaten 67 runs which included four sixes.

Earlier West Indies captain Kieron Pollard won the toss and elected to field first. Pollard's decison to bowl first was rewarded as the Indian openers were unable to provide a good start to the team.

However, Dube's maiden T20 international fifty ensured that the hosts continued scoring at a brisk pace. Dube, who was promoted to crucial number 3 spot, struck four sixes and three fours before getting dismissed on 54 off 30 balls.

West Indies' disciplined bowling attack ensured that India kept losing wickets at regular intervals. Most of the Indian batsmen failed to convert their starts into a big score and Rishabh Pant's quickfire 33, in the end, gave the impetus to India to put up a fighting total of 170 for the loss of seven wickets.

Kohli, who single-handedly pulled off the last match, was unable to repeat his performance and was caught on 19. However, Kohli surpassed his fellow mate Rohit Sharma in the battle of scoring most runs in T20 international cricket.

Kesrick Williams and Hayden Walsh picked up most wickets (2) for the Carribean.