'I ain’t holding him back': Stephen Fleming reveals why MS Dhoni batted ahead of Ravindra Jadeja against DC 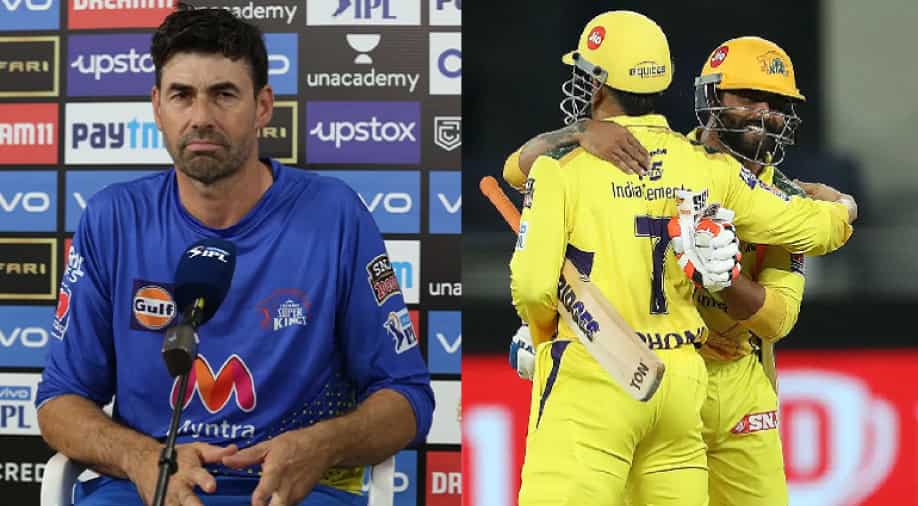 Chennai Super Kings (CSK) head coach Stephen Fleming revealed what unfolded in the dressing room before MS Dhoni walked out to bat ahead of Ravindra Jadeja in the Qualifier 1 against Delhi Capitals on Sunday (October 10).

Vintage MS Dhoni produced a thrilling finish as Chennai Super Kings (CSK) defeated Delhi Capitals (DC) by four wickets in the first Qualifier of the Indian Premier League (IPL) 2021 on Sunday (October 10) to become the first team to seal a spot in the final of the tournament. Dhoni played a quickfire cameo of 6-ball 18 to help CSK chase down the target of 173 runs with two balls to spare and take his team into the final.

Dhoni rolled back the clock with his heroics as he once again soaked up the pressure in a tense situation and took CSK over the line in what was an epic run-chase. The CSK skipper was out of form throughout the season and many didn't expect him to come above Ravindra Jadeja in the 173-run chase with the Men in Yellow needing 24 runs to win from eleven balls.

However, the CSK skipper promoted himself above Jadeja and finished the game by scoring 18 runs off just six deliveries with the help of three fours and a six. CSK head coach Stephen Fleming revealed he had a long chat with Dhoni during the run-chase and the look in the CSK skipper's eye stopped Fleming from questioning him when he decided to walk in to bat and take it upon himself to finish the game for his side.

Providing insights of what unfolded in the CSK dressing room before Dhoni walked out to bat, Fleming said it was the longest he had spoken to Dhoni during the run-chase than he has in a long time.

“There was a lot of chat. We spoke more in those 20 overs than we have for a long time. There was a lot of technical discussion and maneuvering to try and work out how this was going to unfold. When the captain got looked in his eyes, he said 'I’ll go'; it’s been well-documented the times that he has done that. Today was one of those. I ain’t holding him back, and we saw the result of that,” Fleming said in the post-match presser.

Also Read: WATCH - Sakshi gets emotional as MS Dhoni finishes off in style to take CSK to IPL 2021 final with DC win

Dhoni missed the first ball he faced against DC pacer Avesh Khan before slamming a six on the next ball. He then smashed three fours against Tom Curran in the final over to take CSK over the line and confirm their spot in the final. Fleming said it was emotionally great to see Dhoni finish another game for CSK despite being out of form and age not being on his side anymore.

“It was emotionally great for us. We wish him every time he goes out. We know the pressure he has and the expectation there is on him. Again, he came up trumps for us. It was emotional in many ways, and was very important. And the captain had the opportunity to do that for us,” said the CSK head coach.