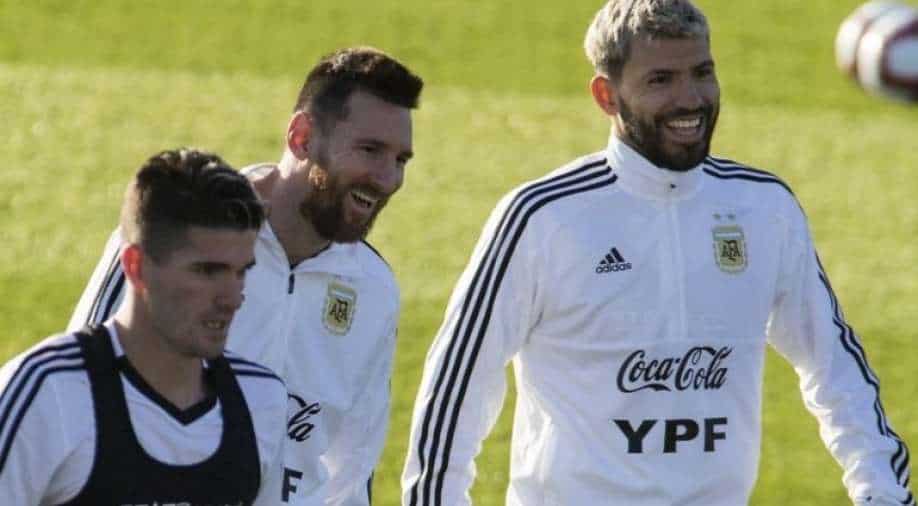 Sergio Aguero had been out of action after suffering chest pains during Barca's 1-1 draw against Alaves in La Liga on October 30.

The Argentine forward Sergio Aguero announced his retirement from football on Wednesday due to a heart condition. Aguero had been out of action after suffering chest pains during Barca's 1-1 draw against Alaves in La Liga on October 30. The 33-year-old was taken to a hospital for tests and subsequently diagnosed with a cardiac arrhythmia, after which he was ruled out for three months.

"Practically a whole career together, Kun ... We lived very beautiful moments and others that were not so, all of them made us unite more and more and be more friends. And we are going to continue living them together outside the field. With the great joy of lifting the America's Cup so little ago, with all the achievements you achieved in England," Messi wrote on Instagram.

"And the truth is that now it hurts a lot to see how you have to stop doing what you like the most because of what happened to you. Surely you will continue to be happy because you are a person who transmits happiness and those of us who love you will be with you. Now a new stage of your life begins and I am convinced that you are going to live it with a smile and with all the illusion that you put into everything," he added.

Aguero did not make his return to the field and has now chosen to hang up his boots after an illustrious 18-year career.An emotional Aguero at Camp Nou said: "This conference is to communicate that I have decided to stop playing football."

"It is a very difficult moment. The decision I have made I have taken for my health, that is the main reason, because of the problem that I had a month-and-a-half ago. I was in good hands of the medical staff who have done their best and have told me the best thing would be to stop playing," he added.

Aguero has found back of the net 379 times in 663 games across spells at Independiente, Atletico Madrid, Manchester City, and Barca. He has also recorded 118 assists.

ALSO READ: Explained: What is arrhythmia? A heart condition that might force Sergio Aguero to retire at 33

The Argentine has won 17 trophies in total, 15 of which were claimed during his 10-year stay at Manchester City, where he emerged as one of the legendary forward of his generation.

The Manchester club has won five Premier League titles with Aguero as the marksman. In his first season with Manchester City, he entrenched in the club's history when he famously scored the dramatic late-winning goal against QPR in the last game of the 2011-12 season to secure his team`s first Premier League title.