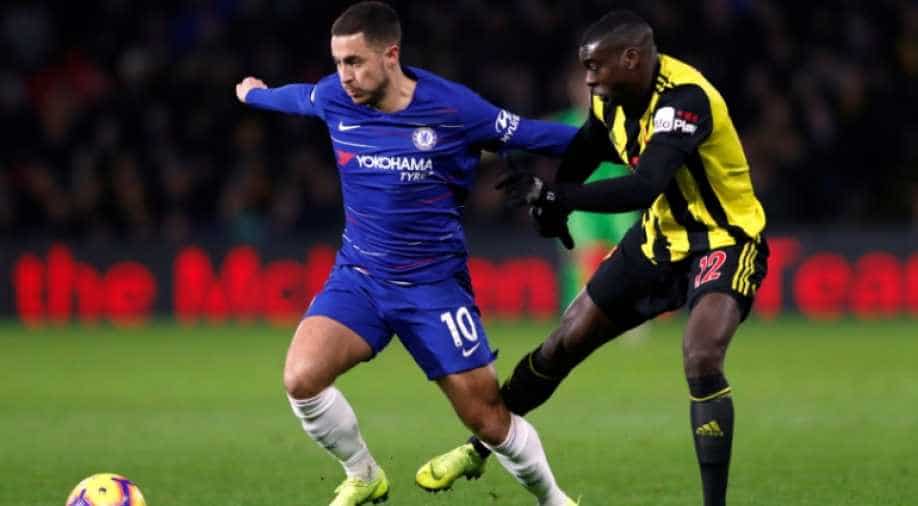 The win, however, was overshadowed by the injury suffered by Watford defender Christian Kabasele, who crashed into a goalpost early in the game.

Eden Hazard took his goal tally for Chelsea to triple figures, scoring twice in a 2-1 win at Watford on Wednesday as the Blues stayed fourth in the Premier League.

After a home loss to Leicester on Saturday, Chelsea bounced back with a well-deserved win at Vicarage Road, where they dominated possession, though Watford were not without their chances.

The match, however, was overshadowed by the injury suffered by Watford defender Christian Kabasele, who crashed into a goalpost early in the game.

Despite appearing to suffer a rib injury in the collision, he tried to continue but ended up being carried out of the ground on a stretcher while being given oxygen.

Hazard said after hitting the century mark of goals his ambition was to become a Chelsea legend.

"A hundred and 101 goal with this amazing club is something I would never forget," he told Sky Sports.

"I want to score more goals for this club and then try to be a legend (like Frank) Lampard, (John) Terry, (Didier) Drogba."

It was not, however, a perfect performance by Hazard, who somehow failed to score from point-blank range in the 32nd minute when he could not connect with a sublime low cross from full back Cesar Azpilicueta.

But the Belgian made amends by opening the scoring in first half stoppage time when he rounded Watford 'keeper Ben Foster and slotted home after being put through with a pass by Mateo Kovacic.

Watford equalised moments before the break with a well-worked corner to Argentine midfielder Roberto Pereyra, whose superbly-timed volley from the edge of the box rocketed into the net for his sixth Premier League goal of season.

Chelsea were awarded a penalty early in the second half when Hazard was brought down by Foster, who received a yellow card.

Hazard converted from the spot for what proved to be the winner.

"I think we played a good match with a good level of determination and attention for 90 minutes," said Chelsea manager Maurizio Sarri.

"It was dangerous for us when they conceded, but we reacted well and we didn't stop playing our football."

Watford boss Javi Gracia lamented his team's inability to make it three wins in a row.

"We knew it would be difficult for us but after going behind in the first half and to draw level, we were playing better in the second half," he said.

"We were dominating the game, had more possession and then conceded the goal. It was tough from there and difficult to keep pressing."