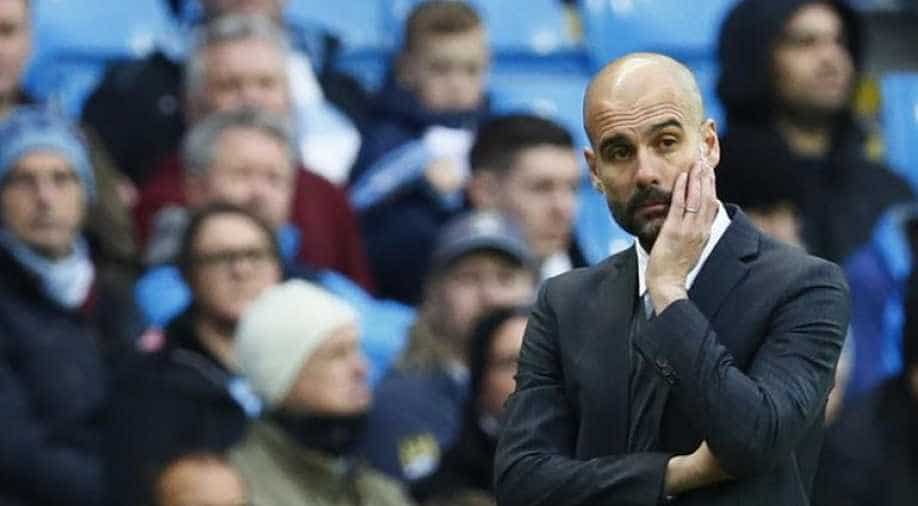 'It is a pity the game finished like this,' Guardiola told the BBC. 'I don't like that and I apologise for what happened.' Photograph:( Reuters )

Pep Guardiola apologised for Manchester City's part in the ugly mass brawl that disfigured the end of their 3-1 defeat by Chelsea on Saturday as he contemplated his most problematic day in the Premier League.

While Guardiola talked of his regret about the melee that saw City pair Sergio Aguero and Fernandinho sent off in stoppage time, rival manager Antonio Conte praised his team's character.

Chelsea came from 1-0 down to record an eighth straight win and move four points clear at the top but City's failure to capitalise when they were dominating the game led to their players losing their heads at the Etihad Stadium.

Aguero was sent off for a wild knee-high tackle on David Luiz, prompting widespread anger on the touchline.

With players and staff from both teams wading in to scuffle and referee Anthony Taylor in danger of losing control, Fernandinho also saw red for pushing Cesc Fabregas over an advertising hoarding.

"It is a pity the game finished like this," Guardiola told the BBC. "I don't like that and I apologise for what happened.

"I don't think Aguero's challenge is intentional. Both players were strong, that is all. Then Fernandinho went over to defend his team mate."

"We didn't win because we missed a lot of chances, not because of the referee's decisions," Spaniard Guardiola said, frustrated at how his side had missed excellent opportunities to seal the win when they led 1-0 through a Gary Cahill own goal.

"In the boxes we are not strong enough. It is a problem we have had all season. It is difficult for us to score goals and we concede them very easily."

Italian Conte was thrilled with Chelsea's discipline and character amid the chaos, with even the hot-headed Diego Costa, who equalised with his 11th league goal of the season, trying to act as an unlikely peacemaker during the scuffle.

"Diego is showing he is using his passion in the right way and I'm very happy about that," Conte said.

"I saw lots of character from my team and that's very important to grow. But we must continue to work and improve."