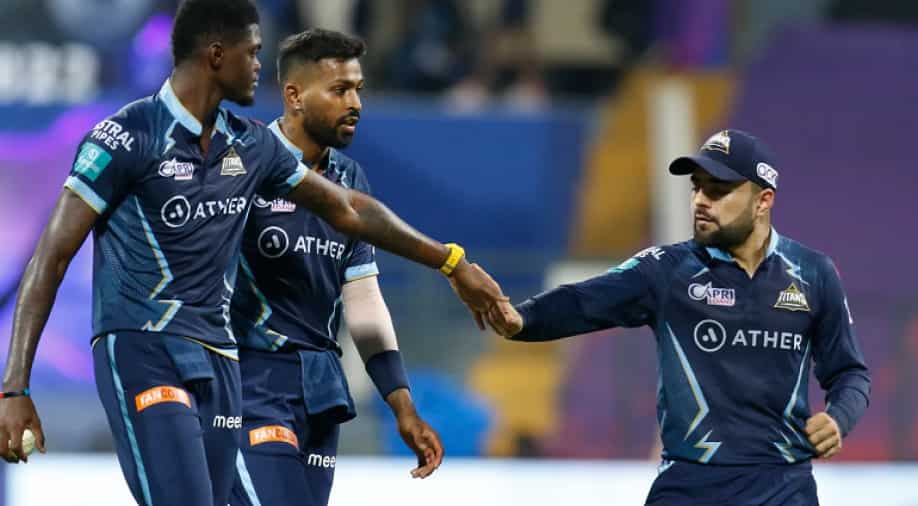 Gujarat Titans will be looking to continue their winning run against RCB. | Photo - IPL | Photograph:( Others )

Royal Challengers Bangalore (RCB) will be looking to bounce back to winning ways when they take on table-toppers Gujarat Titans (GT) in match no. 43 of the ongoing Indian Premier League (IPL) 2022 on Saturday (April 30). While RCB are currently on a losing streak of two matches, high-flying Gujarat Titans have so far lost only one game this season.

After a brilliant start to the season, Faf du Plessis-led RCB have faltered as they find themselves at the fifth spot on the points table with 10 points from nine matches. In their last outing, RCB were thrashed by 29 runs by Rajasthan Royals as Virat Kohli's woeful run with the bat continued in the tournament.

Kohli was yet again dismissed cheaply on just 9 runs despite being sent to open the innings with skipper Du Plessis. The change didn't work in RCB's favour as they failed to get off to a good start and fell short in the run chase. Besides Kohli, all-rounder Glenn Maxwell also has a couple of low-key scores in his last two matches.

While there remain concerns in their batting line-up, RCB bowlers have also been far from consistent as the likes of Harshal Patel and Mohammed Siraj have been taken for runs. Josh Hazlewood has been the most impressive so far for them in the pace department while Wanindu Hasaranga too hasn't been consistent in the spin department.

Gujarat Titans had pulled off a miraculous run chase against Sunrisers Hyderabad in their last game after sensational cameos from Rashid Khan and Rahul Tewatia. Opener Wriddhiman Saha also roared back to form with a brilliant half-century and will be hoping to keep the opening slot.

Gujarat Titans have one of the best bowling attacks in the tournament consisting of the likes of Mohammed Shami, Lockie Ferguson, Alzarri Joseph and Rashid Khan. RCB batters will be put to the test against the in-form GT bowling attack at the Brabourne Stadium in Mumbai on Saturday.

Gujarat Titans have turned out to be the team of the season with some breathtaking performances in their league matches so far. The table-toppers have pulled off victories from improbable situations and are expected to continue their winning run against RCB on Saturday.