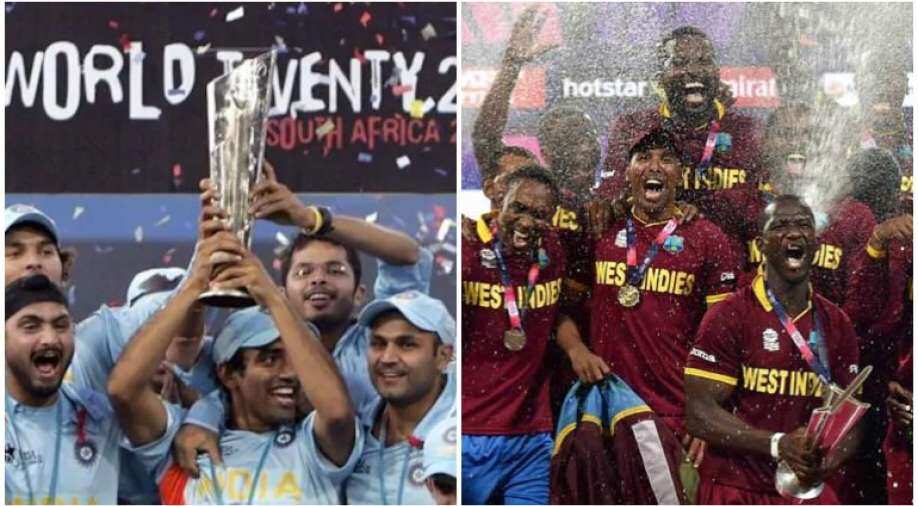 The forthcoming 2021 T20 World Cup is set to commence from October 17 in the UAE. Ahead of it, let us relive 5 epic encounters in the tournament-history:

The T20 World Cup 2021 is set to commence from October 17, in the UAE. After a year-long delay, the mega event will finally kick off in UAE after Australia couldn't host the edition last year due to the Covid-19 pandemic. The seventh edition will follow the template of the previous edition of 2016, held in India. The showpiece event will begin with the qualifying round, where the top-two sides from the two groups will join the ten automatically qualified teams in the Super 12.

Ahead of all the action in the upcoming T20 World Cup, here's a look at some of the most epic encounters in the tournament-history:

1) India beat Pakistan by 5 runs in inaugural final: Winning the toss, MS Dhoni-led Men in Blue opted to bat first in the 2007 edition's finale. Riding on Gautam Gambhir's 75 and Rohit Sharma's finishing skills, India posted a competitive 157-5 in 20 overs. In reply, Misbah-ul-Haq lifted Pakistan's spirits when they were down and out at 77-6 to narrow down the equation to 13 off 6 balls, with one wicket in hand. However, Joginder Sharma stood tall in the riveting final over as Misbah (38-ball 43)'s wicket led to Men in Green being all-out for 152 in 19.3 overs. Irfan Pathan was the Man-of-the-Match for his 3 for 16.

2) Netherlands beat England by 4 wickets: In the first match of the second edition, England lost to minnows Netherlands by four wickets. Riding on Luke Wright's 71 and Ravi Bopara's 46, England managed 162-5. While the Dutch were 23-2 and further reduced to 66-3, Tom de Grooth's 49, Peter Borren's 30 and Ryen ten Doeschate's 17-ball 22* took them home in a dramatic last-over finish. Stuart Broad failed to hold his nerves in the last over -- with  an overthrow -- as Netherlands earned a last-ball win.

Australia kept losing wickets at regular intervals and were on the back foot, at 62-4 in 8.2 overs. However, Cameron White's brisk 31-ball 43 and Michael Hussey's match-winning 24-ball 60 took the Men in Yellow past the finish line. Hussey's 60 included 6 sixes and 3 fours, at a strike-rate of 250. Aussies hit 14 sixes compared to Pakistan's 8; being the difference between the two sides.

4) India beat South Africa in thrilling semi-final: In the second semi-final of the 2014 edition, Dhoni-led India faced Faf du Plessis' South Africa at Dhaka. Riding on Du Plessis' 58 and attacking knocks from JP Duminy and David Miller, Proteas posted 172-4. India started off nicely courtesy Rohit Sharma-Ajinkya Rahane, however, they still had lots to do in the last ten overs.

Virat Kohli timed his innings perfectly and took on the attack with Yuvraj Singh not being at his fluent best at the other end. The then vice-captain took on the pacers and handled Imran Tahir with ease, coming to the pitch of the ball and making excellent use of his footwork, to narrow down the equation to 40 off the last 24 balls. Suresh Raina's 10-ball 21 and Kohli's majestic 44-ball 72*, at a strike-rate of 163.64, took India to the final.

5) Carlos Brathwaite's 4 sixes takes Windies to their second title: Daren Sammy-led West Indies opted to bowl first in the 2016 edition's final, at Eden Gardens, Kolkata, versus Eoin Morgan-led England. Sammy & Co. restricted England to 155-9. Joe Root, Jos Buttler and David Willey's cameo took England to a healthy total whereas Windies' run-chase started off poorly; being 11-3 in no time. Marlon Samuels -- the Player-of-the-Match in the 2012 edition's final -- stood tall with his unbeaten 85 whereas Dwayne Bravo's 25-ball 27 narrowed down the equation to 19 off 6 balls.

Brathwaite, who was batting on 10 off 6 balls, took Sammy & Co. home with four back-to-back sixes in the last over -- with two balls to spare -- as Windies stunned England and earned a win from the jaws of defeat.

Apart from these, many other humdingers have been witnessed in the T20 WC history. For instance, the India-Pakistan bowl-out clash in 2007, India-Australia 2016 virtual quarter-final encounter, Netherlands-Ireland's epic high-scoring tie in the qualifiers in 2014, India-Bangladesh tie in the 2016 edition, Super-over fixtures in 2012, involving New Zealand-Sri Lanka and the Black Caps-Windies.