From Amazon delivery man to Scotland's hero: Chris Greaves' story is an inspiration to all 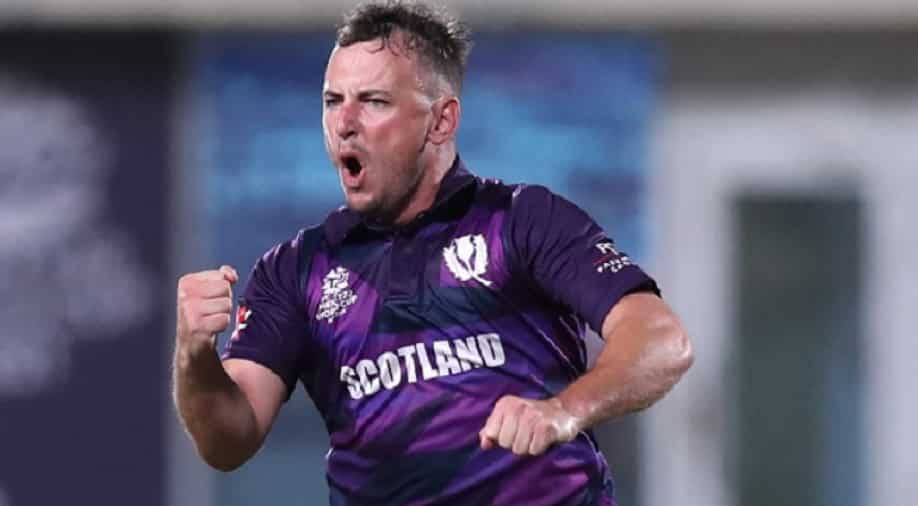 Chris Greaves was delivering parcels for Amazon not too long ago. Photograph:( AFP )

Chris Greaves scored 45 off 28 balls and picked up two wickets to help Scotland stun Bangladesh by six runs in the T20 World Cup 2021 opener on Sunday. Greaves who was working as an Amazon delivery man a few days ago has had a remarkable rise in cricket.

Scotland pulled off a huge upset as they defeated Bangladesh by 6 runs to get their campaign off to a winning start in the T20 World Cup 2021. All-rounder Chris Greaves turned out to be the hero for Scotland with his heroics with the bat and the ball. Greaves scored a quickfire 45 off 28 balls before picking up two wickets as Scotland stunned Bangladesh.

Greaves' remarkable rise in cricket is nothing short of an inspiring tale as he was working as a delivery boy for Amazon not too long ago. The all-rounder, who played an instrumental role in helping Scotland earn their first-ever win over a Test-playing nation, used to deliver parcels for Amazon, revealed Kyle Coetzer, who is leading the country at the showpiece event.

The 31-year-old's journey has not been an easy one as he comes from a humble background and has worked tremendously hard to realise his dream of playing in a World Cup for Scotland. Greaves came out to bat at number 7 against Bangladesh at the  Al Amerat Cricket Ground on Sunday and played a game-changing knock of 45 runs laced with 4 fours and 2 sixes to help his side arrest a collapse and post 140 runs on the board.

Later, he combined with Bradley Wheal to restrict the Bangladesh batting line-up to 134 to secure Scotland's first win at the tournament. While Greaves finished with excellent figures of 2/19 in his 3 overs, Wheal picked up three wickets in his spell while conceding only 24 runs.

Scotland skipper Coetzer revealed how Greaves has sparked a turnaround in his professional career and said he was proud of the work he has put in to stand where he is today.

"I am really proud of Greaves. e really sacrificed a lot. He was delivering parcels for Amazon not too long ago, and now is getting Player of the Match against Bangladesh. I am not sure if he will appreciate me saying this," Coetzer said.

"Seeing the performance from Mark Watt and Chris Greaves with the bat today, they are lesser-known people who had to make many sacrifices to get to where they are today," he added.

Greaves, who made his international debut earlier this month, had once met former England wicket-keeper Matt Prior during a nets session in Wanderers where he created an impression on the Englishman with his skills. Greaves reportedly casually told Prior that he happened to have a British passport and was looking at the UK as an option to play professional cricket.

Greaved shone at the biggest stage of them all at the T20 World Cup on Sunday and announced his arrival with a splendid show against one of the formidable sides in the Qualifiers. He would be hoping to make the most of his chances in the upcoming games and sign off from the tournament making a name for himself in the shortest format.