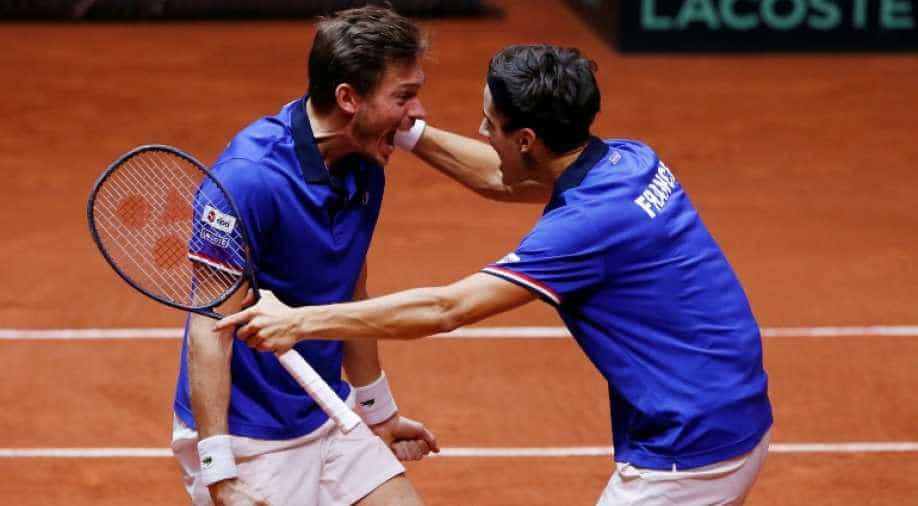 Noah, who cried during the anthems before play, hopes to sign off his third stint as captain by delivering France's 11th Davis Cup, but admits his team still have a mountain to climb.

The Davis Cup is entering a brave new world - but it is not leaving the old one quietly.

Nicolas Mahut and Pierre-Hugues Herbert made sure of that with a gripping doubles win that keeps France's hopes against Croatia alive in the last final to be staged in the event's traditional format.

It meant the last head-to-head Davis Cup final before a soccer World Cup-style format kicks off in 2019 will stretch to three days, with Croatia still in the driving seat at 2-1 ahead.

Fifty huge heaters dangle above the claycourt constructed under the retractable roof of the Stade Pierre Mauroy.

Organisers could have saved the electric bill and tapped into the energy produced by a passionate crowd, most wearing blue, who never shut up from the first point to last.

The home win kept alive the possibility, however remote, that Yannick Noah's champions can storm back to become the first team since Australia against the U.S. in 1939 to win a final from 0-2 down.

It is a long shot with Marin Cilic and Borna Coric, ranked seven and 12 in the world respectively, expected to claim the one point Croatia need to win the title for a second time.

Cilic will play first on Sunday, probably against Lucas Pouille, who was left out by Noah on Friday.

Should Cilic lose, it would come down to a deciding fifth rubber between Coric and, most likely, Herbert, as Jo-Wilfried Tsonga is unlikely to play after picking up an injury during his defeat by Cilic on day one.

Whatever happens, French Open champions Mahut and Herbert did their bit, resisting a fierce Croatian fightback to prevail.

"We tried to keep the team alive today," Mahut, who now boats a 9-2 record in Davis Cup doubles, said.

"We want to win the Davis Cup and I think our players can do it tomorrow."

Noah, who cried during the anthems before play, hopes to sign off his third stint as captain by delivering France's 11th Davis Cup, but admits his team still have a mountain to climb.

"We have to try to visualise a positive outcome to win the whole thing," he said. "You saw today what can happen when the fans got involved. That can be positive for us and negative for the other side.

"Whatever the outcome it's an historic weekend for Davis Cup lovers. At times, I was overwhelmed by the atmosphere. We may not ever have this again. Except for tomorrow!"

It looked like being a comfortable win for the French duo when they had points for a double break in the third set, having dominated the first two.

But Pavic and Dodig, who with Cilic beat Mahut and Herbert in the 2016 semi-final, France's last defeat, clawed their way back to set home nerves jangling.

From 3-1 down, Croatia broke twice to reel off five straight games and take the third set.

At the start of the fourth, France saved three break points on the Herbert serve and he was sweating again at 2-2 as the momentum swung Croatia's way.

French fans, who at various points broke into Icelandic thunderclaps and renditions of La Marseillaise, ratcheted up the decibel levels as Pavic served at 4-5.

When the 25-year-old double-faulted at 0-30 to give France three match points, bedlam broke out in the stands with opposing fans trying to out-chant each other.

Umpire James Keothavong was struggling to keep order but somehow Pavic kept his head as he and Dodig dug themelves out of a seemingly impossible position to make it 5-5.

Boos rang out as Pavic gestured defiantly at the massed ranks of blue.

They turned to cheers though as Mahut and Herbert jumped into a 4-1 lead in the tiebreak and though the Croatians got it back to 4-3, the French pair then kept their cool with Mahut's reflex volley sealing the win.