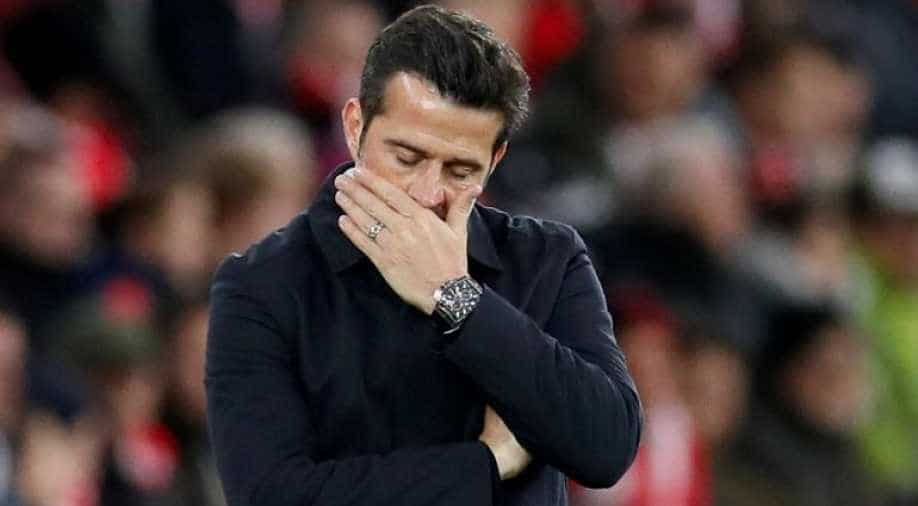 Silva, who arrived at Goodison Park in May 2018, has left with the team languishing 18th in the table on 14 points after they lost nine of their 15 league games this season

Everton have sacked manager Marco Silva the day after dropping into the relegation zone following a 5-2 defeat at Merseyside rivals Liverpool, the Premier League club said on Thursday.

Silva, who arrived at Goodison Park in May 2018, has left with the team languishing 18th in the table on 14 points after they lost nine of their 15 league games this season.

"Everton Football Club can confirm that manager Marco Silva has left the Club," Everton said on their website.

"Majority Shareholder Farhad Moshiri, Chairman Bill Kenwright and the Board of Directors would like to thank Marco for his service over the last 18 months and wish him well for the future," the statement added.

"Duncan Ferguson has taken temporary charge of the first team and will manage the side for the game against Chelsea on Saturday. The Club aims to confirm a new permanent manager as swiftly as possible."

It is the latest managerial failure at Everton after Dutchman Ronald Koeman's ill-fated spell ended in October, 2017 and his replacement Sam Allardyce was dismissed with a year remaining on his contract before the club turned to Silva.

Silva was reported to have survived one round of emergency talks among the Everton hierarchy after the home loss to Norwich City last month but his dismissal was no surprise following defeats by Leicester City and Liverpool.

Everton conceded five league goals against Liverpool for the first time since 1982, and the Portuguese coach conceded his players had buckled under the pressure at Anfield.

British media reported that former Everton boss David Moyes is favourite to replace Silva at Goodison Park, although that would likely receive a mixed reaction from the fans.

Moyes, who had a successful 11-year stint in charge at Goodison Park from 2002-13, would likely be joined by former Everton midfielder Tim Cahill as part of his coaching staff.

Silva has now managed three Premier League clubs after a spell with Hull City, which ended in relegation and his departure, and at Watford, where he was sacked after interest from Everton but also a poor run of results.

The 42-year-old's failure to bring success to Goodison will have disappointed Moshiri who found himself in a bitter row with Watford to gain the services of the Portuguese.

After Silva was eventually fired by Watford, he was given significant investment in new players with Everton looking to break into the top six and push for a Champions League place.

They have spent over 200 million pounds in the past two close-season transfer windows but few of the players brought in have made a positive impact and the club instead faces a battle at the wrong end of the table.

The on-the-field troubles come at a time when Everton plan to move to a new stadium and are in marked contrast to the fortunes of neighbours Liverpool, who are European champions and current runaway Premier League leaders.

Former striker Ferguson, a long-time member of the Everton coaching staff under various managers, is not viewed as a major contender for the top job.