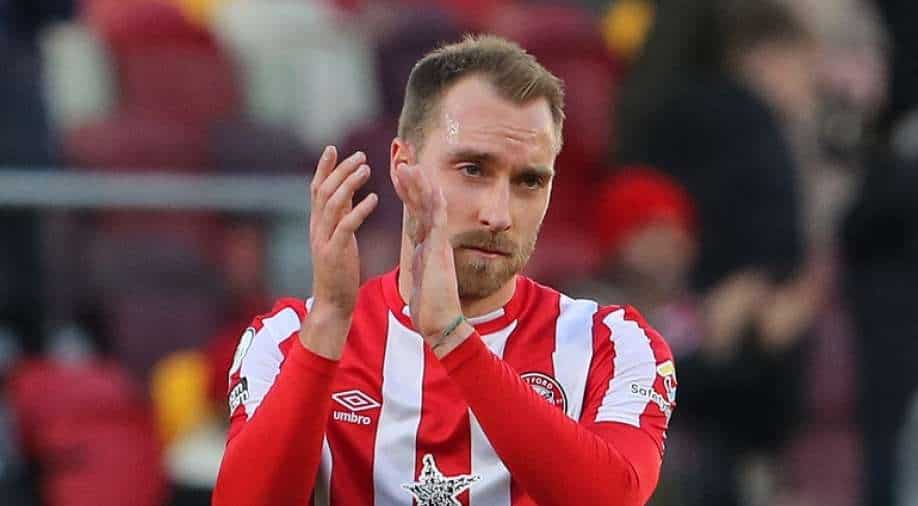 Eriksen collapsed on the pitch during Euro 2020 game against Finland in June. Photograph:( AFP )

"I wouldn't say it was a new chapter, I would say it's my life continuing," Christian Eriksen told the BBC.

Brentford midfielder Christian Eriksen started his first competitive game since suffering a cardiac arrest as he helped his side to a vital 3-1 win at Norwich City on Saturday.

The Dane, who needed life-saving treatment on the pitch during Euro 2020 after collapsing against Finland in June last year and has a special device fitted in his heart, marked the occasion with his first assist for his new club.

It was Eriksen's corner that was eventually turned in by Ivan Toney who then scored two penalties after the break.

Eriksen, who came on as a substitute against Newcastle United in Brentford's last game, played the full match.

"I wouldn't say it was a new chapter, I would say it's my life continuing," the former Tottenham Hotspur player, whose contract with Inter Milan was curtailed, told the BBC.

"Of course I've had a bit of a setback, it's taken me a few months, but after that it's been about getting my family back together and being a normal family again.

"Being here now, eight or nine months later is incredible."

Brentford manager Thomas Frank praised his fellow Dane's display and says there is more to come.

ALSO READ: Jurgen Klopp could extend Liverpool contract beyond 2024 if he has 'energy'

"Good to see him out there playing 90 minutes," he said.

"It was a top delivery for the first goal and there were some top passes so very pleased to see that.

"But you can see that there is more to come from him which of course is positive."

Victory eased Brentford's relegation fears although they are still in danger in 15th place with 27 points and having played more games than all the teams beneath them.

For bottom club Norwich, however, they are in danger of losing touch. They have 17 points with 11 games left.

Manager Dean Smith was disappointed with one of the decisions to give Brentford a penalty and felt his own side, who had a goal disallowed by VAR, should have also been awarded a spot kick.

"Really disappointed with the official's performances. Football is about moments in games. I was really pleased with that first half, we were the better team," he said.

"In three moments we are 3-0 down and you can't understand why... I didn't feel we deserved to lose. Unfortunately it felt things contrived to go against us today."