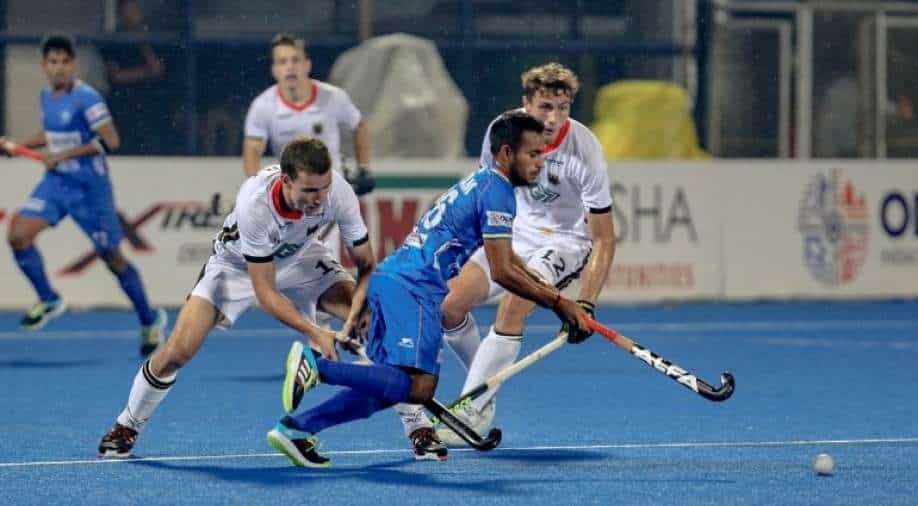 India will play against France for the third position in the showpiece.

Germany defeated the defending champions India 4-2 in the semi-final of the FIH Men's Junior Hockey World Cup 2021 in Bhubaneshwar on Friday.

For Germany Erik Kleinlein, Phillip Holzmueller, Hannes Muller, Christopher Kutter got their names on the scoring sheet. While Uttam Singh and Dhami scored goals for India at the Kalinga Stadium.

Six-time champions Germany will now clash with Argentina in the final of the World Cup after the latter's shootout win over France. Meanwhile, hosts will play against France for the third finish in the showpiece.

The hosts started the match very passively as Germany dominated possession but nothing really came out of it.

In the dying minutes of the first quarter, the European team drew the first blood as Erik Kleinlein tapped in the dead ball inside the net from a rebound on the penalty corner. With five seconds left, India also got a penalty corner but Sanjay stormed his drag-flick wide.

In the second quarter, flood-gates to goal opened as Germany double their lead after a shot from Phillip Holzmueller took a deflection and lobbed over India goalkeeper Pawan. Soon, the German captain, Hannes Muller rifled a tomahawk back into the net as the situation for hosts went from bad to worse.

However, India then stopped the one-way German traffic after Uttam Singh deflected a shot into the back of the German net. But the European team again profited from the big pockets in India's defence as they earned a penalty stroke after the PC was blocked by hosts' defender feet. Christopher Kutter made no mistake from the spot as Germany regained their three-goal lead.

In the second half, Germany started on the front foot and with the momentum on their side. The nerves did play their part for India as Manjeet missed a chance to get the decisive touch in the front of the German goal in the third quarter.

After goal-less Q3, Germany ensured to push down any resistance from hosts. The consolation goal for India came from Dhami who rifled past German GK to cut the deficit in half.