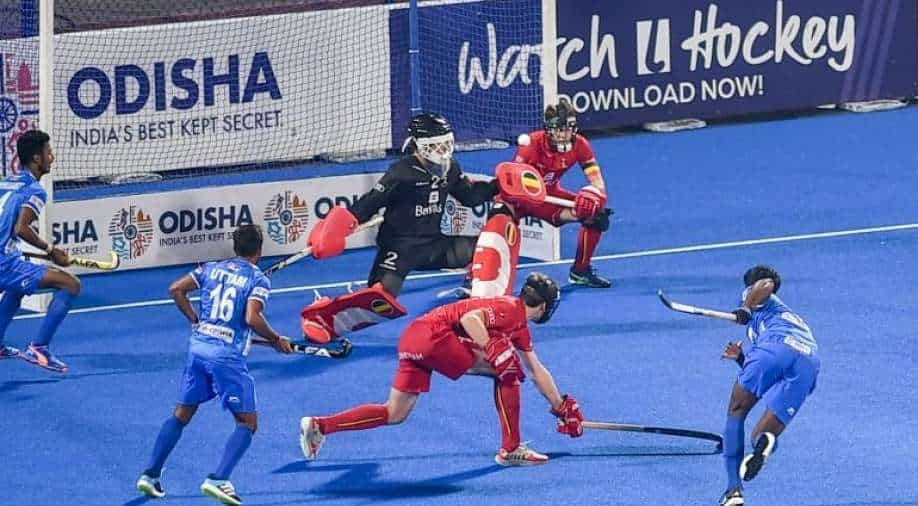 Sharda Nand Tiwari's 21st-minute goal became the only difference between the two sides at the Kalinga Stadium.

Defending champions India edge past Belgium into the semi-final of the FIH Men`s Junior Hockey World Cup 2021 in Bhubaneshwar on Wednesday.

Sharda Nand Tiwari's 21st-minute goal became the only difference between the two sides at the Kalinga Stadium.

India will now clash with six-time champions Germany in the semi-final. While Argentina will play against France as the latter cruised past Malaysia to enter the last-4.

As expected, the match started at a fast pace but remain pretty cagey for most of the first quarter. The team from Europe started on the front foot as they dominated possession but India grew into the match as the quarter progressed.

In the second-quarter vice-captain, Sanjay did the trick for the hosts as he won the penalty corner after storming down from the right flank.

India colts who have been clinical in the PC during the whole tournament made sure to utilise the big chance in the game as Sanjay came up with a variation that worked to utter perfection.

Houston, we are into the semis 🇮🇳💙

He faked a drag flick and rounded it for Sharda Nand Tiwari who blasted it past the Belgium goal-keeper.In the second half, both sides had their chances to go in front but none were taken.

In the tense last fifteen minutes, Indian goalkeeper Pawan superbly held his nerve as he pulled off two big moments during Belgium`s PC to ensure hosts play SF against Germany.