FIFA World Cup 2018: France, Denmark in Round of 16 after 1st goalless draw 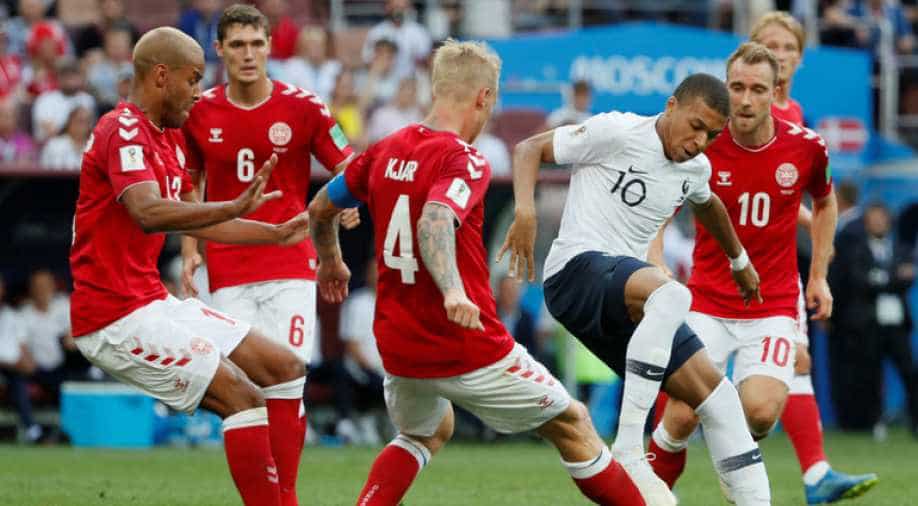 The goals finally dried up at this thrilling World Cup on Tuesday when a flat France and dull Denmark played a mutually beneficial 0-0 draw at the Luzhniki Stadium which allowed the French to finish top of Group C and the Danes to qualify in the second spot.

Thirty-six games in Russia had failed to result in a goalless stalemate, but neither France nor Denmark ever looked like scoring in a tedious affair.

France have already assured qualification but wanted to go through in top spot to avoid a likely last-16 clash with in-form Croatia.

Denmark could have only been denied qualification had they lost to France and had Australia beaten Peru in the match being simultaneously played in Sochi.

But with the Peruvians leading 2-0 before the hour in that game, the Moscow clash settled down to little more than a canter.

While not in the same category as the infamous 1982 "Nichtangriffspakt von Gijon" - the non-aggression pact of Gijon - when West Germany and Austria both settled for a 1-0 German win which put them both through, neither side at the Luzhniki looked to be going all out for victory.

"It was our objective to ensure we were first out of the group... The objective was achieved," French coach Didier Deschamps said.

"It was very difficult. Teams are very well prepared, and it's not easy against such a packed defence."

The writing had been was on the wall early in the capital, with the play dominated by industry rather than any kind of inspiration.

The Danes built a pattern of firing balls deep before quickly tracking back, while the French kept possession well but struggled throughout with the final ball.

Antoine Griezmann, surprisingly not among the six players rested by Didier Deschamps for this match, looked listless as he sought to probe the Danish defence for a way through.

At times it seemed as though he was on a different wavelength to his teammates, who failed to spot his runs or find the spaces Griezmann played into.

It took more than half an hour before there was any real chance, and then Ousmane Dembele pushed his right foot shot wide of the goal - and of Kasper Schmeichel's overly elaborate dive.

Deschamps brought Benjamin Mendy on for Lucas Hernandez just after halftime, but he might have made a raft of changes as the French continually misfired.

Jeers and whistles swirled around the frustrated crowd as both sides failed time after time to create any real opportunities, the Danes continuing to defend deep and the French rarely breaking out of a trot.

Deschamps substituted Griezmann in the 68th minute for Nabil Fekir, but it was a case of plus ca change.

"I made a lot of changes. That hurts the cohesion a bit but it's good that the whole squad feels involved," Deschamps said.

Few teams will fear either side on the back of this performance but surely there will be better days ahead for both nations when the reality of sudden-death forces their hands.

Their next opponents will be determined later on Tuesday when Nigeria play Argentina in Saint Petersburg, and Iceland face Croatia in Rostov-on-Don.