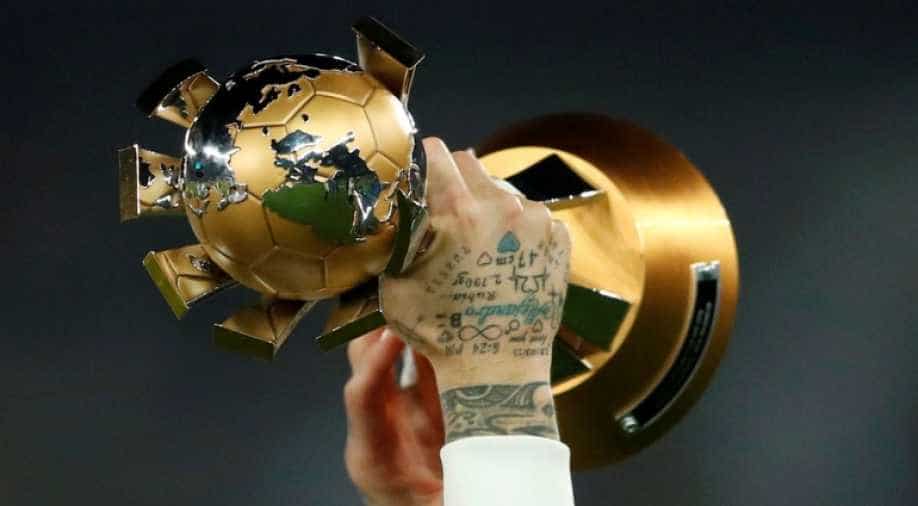 General view of the trophy being lifted by Real Madrid's Sergio Ramos after winning the Club World Cup. Photograph:( Reuters )

Following Infantino's announcement, a spokesperson for the ECA said, 'ECA clubs will not participate in 2021 CWC and will assess participation in editions of the competition post-2024.'

FIFA will go ahead with a new 24-team Club World Cup starting in 2021, its President Gianni Infantino said on Friday, setting the world soccer governing body in conflict with Europe's top clubs.

Infantino, speaking at a news conference, said FIFA had made the decision at its council meeting on Friday.

The competition, however, immediately faced a boycott from Europe's leading clubs, which include the likes of Real Madrid and Manchester United.

The European Club Association (ECA), which represents 232 European clubs, including all the major teams, wrote a letter asking Infantino not to make a decision now and saying they would not take part in the 2021 tournament.

Following Infantino's announcement, a spokesperson for the ECA said, "ECA clubs will not participate in 2021 CWC and will assess participation in editions of the competition post-2024."

UEFA, European soccer's governing body, later said it had a duty to protect the health of players and that its members of the FIFA Council had unanimously voted against the proposal.

"UEFA shares ECA’s view that the International Match Calendar in 2021 does not provide any realistic option to stage a 24-team Club World Cup and that it should furthermore not be played at a time when players should have a well-deserved rest period," it said in a statement.

The tournament would be held instead of the Confederations Cup in June 2021. No host nation has been decided yet, Infantino said.

"We went through a consultation process, spoke with everyone, some agree, others disagree, you have different views and positions," said Infantino.

"I am feeling very positive from the discussions and I am sure that at the end we will be very happy," he said.

"I understand the situation in Europe with stakeholders, the leagues, the clubs, small clubs, big clubs, the players' union -- it's more complex than other countries in the world.

"In football, we are not waging war against each other -- I am confident we can have a good and fruitful cooperation," he added.

Infantino said he believed a 48-team World Cup in 2022 in Qatar is "feasible", adding that FIFA would continue to study the options.

No decision will be made on expanding that tournament, with possible additional host nations, until June, Infantino said.