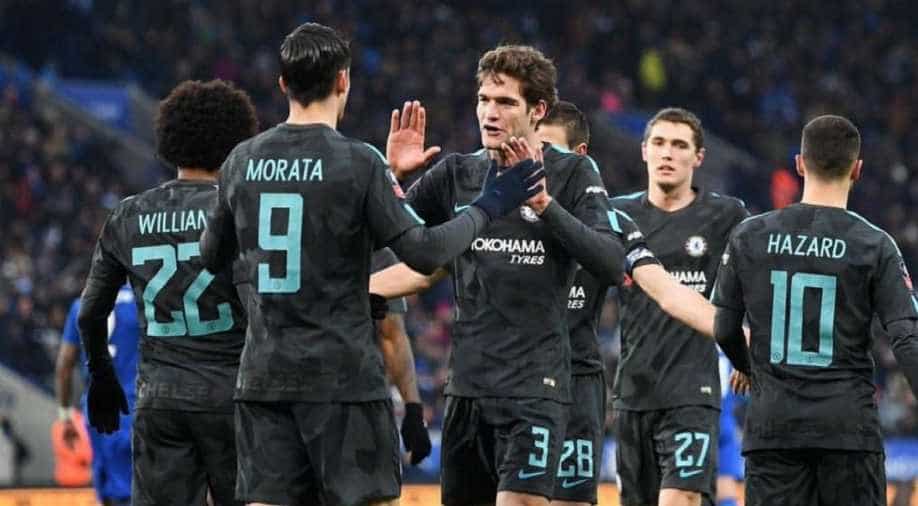 Pedro Rodriguez came off the bench to keep Chelsea's chances of silverware this season alive with an extra-time winner in a 2-1 victory at Leicester on Sunday to reach the FA Cup semi-finals.

Alvaro Morata's first goal since Boxing Day on his return to the Chelsea starting line-up put the visitors on course to bounce back from their Champions League elimination at the hands of Barcelona in midweek.

However, Jamie Vardy's equaliser 15 minutes from time made them do it the hard way in an extra 30 minutes.

Yet, for all Antonio Conte's complaints this season about his side's strength in depth, the Italian was able to call on Pedro to turn the game in Chelsea's favour when he headed home former Leicester favourite N'Golo Kante's cross.

And Conte hailed his players' physical and mental strength to shrug off their Champions League disappointment.

"After a game like Barcelona game -- don't forget we spent a lot of energy -- to play 120 minutes tonight with this weather it wasn't easy," said Conte of his side's resolve in freezing conditions.

Happy for the win and the qualification!! There's only one way: work, work and more work!! Go Chelsea!! ????⚽️ pic.twitter.com/Vfj0XiUpUM

Chelsea had lost three of their past four matches to fall behind in the race for a top-four finish in the Premier League as well as their European exit.

But they will fancy their chances of reaching the final for the second time in as many years under Conte after drawing Premier League strugglers Southampton in the last four.

Yet, the biggest plus of all for Conte going forward may be Morata's return to form after a torrid time in 2018 as both form and fitness have deserted Chelsea's £70 million club record buy from Real Madrid.

Morata had a point to prove after being left out of the Spain squad on Friday just three months ahead of the World Cup.

And he looked keen to make the most of just his second start since the sides last met in a 0-0 draw in early January.

"For sure, for the striker is very important to score," said Conte.

"I think for Alvaro was very important to score, but at the same time I am very pleased for his performance.

"He showed great character, he showed to be strong. I think this goal will be very important for the future for us."

Morata had stung the palms of Kasper Schmeichel from the edge of the box and hit the outside of the post from the narrowest of angles before putting Chelsea in front three minutes before half-time.

Much of the credit must go to Willian, though, who surged through the heart of the Leicester midfield on the counter-attack before feeding the Spaniard.

And Morata coolly clipped the ball beyond the advancing Schmeichel with an assuredness unbefitting of a striker who had gone 13 games without a goal.

Wembley, here we come! Well done boys and thanks to our fans for the amazing support ???????????? #LEICHE @ChelseaFC

The visitors were happy to take their chances on the counter-attack in the second period as they began to feel the after-effects of their run around at Barcelona in midweek.

Leicester's search for an equaliser was largely laboured and, even when a big chance did arise, Vardy headed wastefully over when completely unmarked inside the area.

However, the England international made amends 15 minutes from time when he forced the ball home at the third attempt after Vicente Iborra's first two efforts were blocked and then saved by Willy Caballero.

"I'm a bit upset at the moment because I think we deserved another result," said Leicester manager Claude Puel.

"They found a good clinical edge. Morata's goal was the only chance of the first half. It was harsh to concede just before half-time, but we came back with more calm and more quality."

Crucially, though, Conte was able to refresh his side as Pedro, Gary Cahill and Olivier Giroud were all introduced in the first half of extra time.

And it was Pedro who proved the match-winner in unfamiliar fashion as he rose to outjump Schmeichel and nod into an unguarded net.